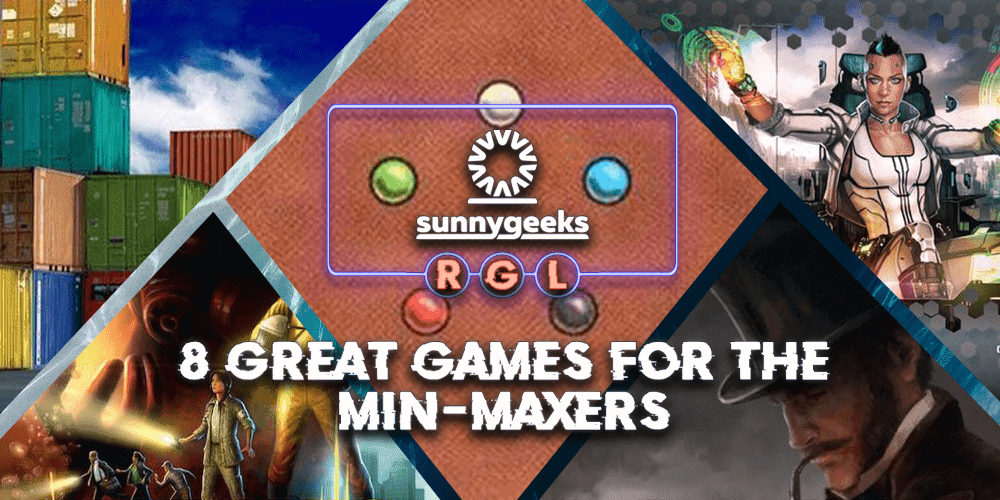 8 Great Games for the Min-Maxers Among Us

Either a living curse or an end-game opponent, min-maxers live for victory. These players tweak their character, setup, or strategy to be incredibly good at one thing. But – like any machine operating at its absolute limits – poke them too hard and the wheels fall off.

Here are eight of our favourite games for brinksman players that love a little bit of optimising and aggression.

Thematically astounding, this abstract lets you play as a civilization that takes small steps forward through innovations – cards in your hand that let your secure points and other actions. However, this comes with a double-edged sword. While outrageous combos, gambits, and lucky plays can see you hurtling to victory – it’s not long before trouble brews. While your plays are optimised, your opponent can jam a stick in your spokes and send you careening off track with a well-timed play. Though the game is hard to come by, it can currently be played on boardgame arena and – while thinky – the asynchronous nature of play means that you can take the time needed to fully mull over your turns.

Literally translated as ‘harmony’, this iconic game takes place during the Roman empire’s era of peace and productivity. Free of conflict and focusing on mercantile aspects, you’d surely there is no room for hyper-aggressive plays? Well, you’d be wrong. Built around a simple card system, it isn’t long before players realize that moves and actions can be chained together. This means responding to a rapidly changing board space, randomized cards, and blocking opportunities for other players. With careful plays, turns are chain reactions of incredible opportunities that spew our points, resources, and taking every action possible to prevent your opponents from taking hold.

For those looking to really find a game that lets them optimise their turns – it’s hard to find more choice than in the world of Magic. This can allow for the creation of Frankenstein decks that have to be truly witnessed to believe. Here card synergy is king, with players able to build decks that click into gear and decimate opponents or create quality activity loops that can cut the legs out from other opponents with terrifying efficiency. While the list of banned cards and type of play changes regularly, there’s few things more satisfying that coming up with a deck that that does one thing dreadfully (or agonisingly) well. Mill Decks, we’re looking at you…

If Magic wasn’t good enough, few players can do better than the options available in Richard Garfield’s other opus. An asymmetric delight, players are asked to come up with two decks – one that lets a nimble runner extract the data they need from behind a brutal company’s servers. The other is for the business in question to squash their opponent like a bug under a hammer. This allows for the creation of decks stuffed with tricksy plots that exploit card synergies, ice and protection that can be sprung at any moment, and much more. Now sadly retired, the wealth of cards in the game make it perfect for running with friends and developing your own internal meta…which we’re sure will be shortly exploited.

A game of ‘big ships and big production’ container is an economic sandbox that sees you and other players butting heads as owners of shipping companies. This means producing, storing, and shipping goods in a surprisingly elegant simulation of contemporary capitalism and all its loopholes. Naturally, certain players will want to find their own optimized route to victory…but quickly realize that things are maybe not that simple. Trade and transport can be carried out on your own goods but also everyone else’s. This means that you can quickly profit over someone else’s optimized plan. And with a limited amount of cash in the game’s marketplace, players can bankrupt themselves with ease. Or, with a few tricky plays, sink their opponents without a trace. Just be sure that your table has enough space to hold the titanic board and miniatures.

Surely a co-op game doesn’t have stat crunching or meaty plays? Maybe you should guess again. Familiar to everyone who ever rolled a dice, players are charged with moving across the board and fighting viruses. Except, things can quickly go wrong. A well-researched player can instantly view the game as a puzzle that needs to be solved, quickly giving out orders to other players to provide an optimised solution to the problems in hand. Thankfully, the genius Brink expansion allows one player to take on the role of a malicious bioterrorist who seeds the map with infections and actively fights against the other players. This breathes new life into what can potentially become a stale game and gives the optimising player the satisfaction of efficiently tearing strips from you.

If you thought Container was bad…wait til you see this. An iconic game from the mind of Martin Wallace, players vie to create an economic engine that will carry you to victory while only slightly exploiting the working classes. What may seem like a dry concept springs to life when players start building their own network connecting their mills, foundries, and more. Mechanically simple, the sheer volume of decisions available to players is absolutely intoxicating – with experienced players tackling a new problem with aplomb every turn, letting you carve a route to victory that leaves you on the cusp of bankruptcy. If you have a member of your group who loves a winding, obtuse, but highly effective path to victory – this is for them!

Ok, here is the point at which the problems begin. Traditionally co-operative, min-maxers have a field day when it comes to character creation. Cranking out key stats quickly lets individuals create a character that may not have the intelligence to understand what a spoon is but possesses the stats to lop a god’s head off their shoulders. While this may make them anathema for anyone who enjoys a good story, having an unbalanced killing machine on the team can come in handy. If you’re keen on conflict, this is the way to go. But if you’re into your plot and story, maybe best to stay clear of Carlos the Dwarf and his incredible damage bonus.

Do you have any game to recommend, that will excite the Min-Maxers among us?! Share it in the comments below 🙂