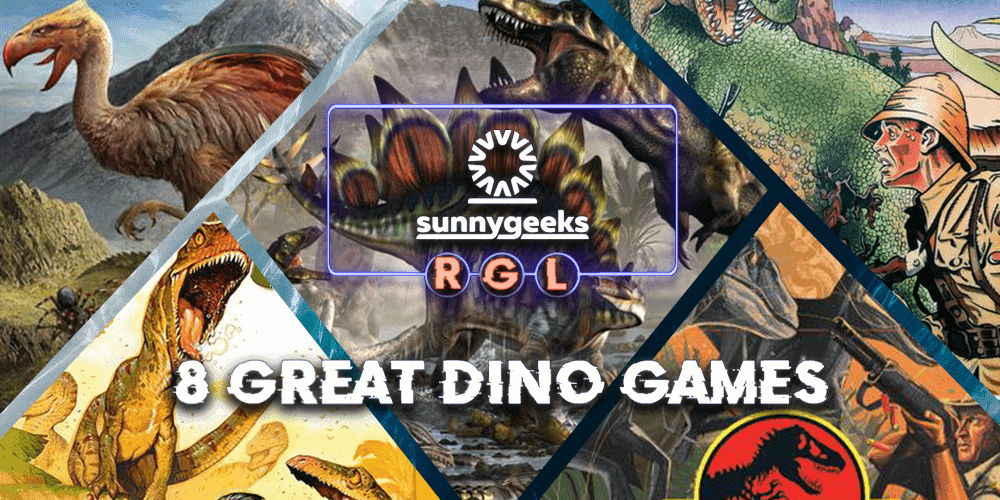 Let’s face it, you knew this one was coming eventually.

While the Venn diagram representing a) people who love board games, and b) people who love dinosaurs is a circle, there are a number of amazing games for dino-fans across the world. Whether you want to capture, evolve, or learn more about dinosaurs…or terrorise Laura Dern.

So, here are eight of our favourite dinosaur-centric board games that you need to pick up and add to your collection today. Starting with-

An asymmetric delight, Raptor sees two players going head to head as they match science against the rage of a pissed off mama dinosaur. Combining hand management and tactical movement, one player represents the team of scientists struggling to tranquilise and collect baby raptors for science and research. The other, controls a colossal raptor that can flit across the board and terrorise the opposition. Exceptionally balanced, Raptor’s gorgeous art and tight play carries the theme. And it won’t be long before you swap sides and try your hand at bettering your opponent’s tactics.

There’s nothing more satisfying than a game that turns out better than it has any right to be. As with its sister-product Jaws, the Jurassic Park board game is a taut, accessible co-op game that pits the island’s original survivors against a horde of iconic onscreen dinosaurs. Cue your own version of the film as you use your individual player powers to hunt down your breakfast or make your escape attempt. While the game may lack the genuine depth of other co-op options, the pick-up-and-play rules and thematic wrapper make it a perfect choice for players of all confidence levels.

“Which dinosaur is best?” We hear you say. The answer? Your dinosaur of course! Putting you in control of your own herd of ‘dinos’, players are asked to become the apex of their species through controlling areas of the board, evolving, and batter your rival species into oblivion. Add in a surprisingly fierce competitive streak and the game’s neat, tidy, and weirdly educational play makes the game perfect for any group. But for those looking to step their play up to the next level-

Infamously complex, incredibly unforgiving, and a bundle of fun; Dominant Species long stood as the gold standard for difficulty in gaming. But under the hood lurks a ten ton monster waiting to get out. Letting you play as reptiles alongside mammals, birds, and more – players vie to become the apex predators and achieve their goals of ‘survival of the fittest. Using a 4X ruleset, the game charges players with increasing their survivability to help endure an oncoming ice age…and victory points, naturally. While the game needs a quality table to hold its wealth of components, it is a fantastic choice for seasoned players looking for an innovative take on the genre. And for those who want to see a dinosaur eat a bunch of monkeys.

More dinosaurs? Less time? Got you. Triassic is an overlooked classic that puts you in the scaled feet of dinosaurs occupying a swamp and…just trying to survive. Beginning with a single herd of the beasts, players seek to grow their numbers, successfully migrate to a verdant environment. Oh, and survive the marauding super predators seeking to have you for brunch. Except you can also unleash these fearsome beasts upon your opponents in an attempt to be the most passive-aggressive stegosaurus in creation.

While the officially branded Jurassic Park game may not scratch your itch for genetic madness, Pandasaurus Games has you covered. Playing out as an elegant worker placement game, players are tasked with dreaming up their perfect dinosaurs and putting them on display for your visitors to view. Oh – didn’t we mention? Each player is running their own park and the more dangerous the creature on display, the more visitors you are going to get. Except, if things go pear shaped – people are going to get gobbled up. With gorgeous art and a surprisingly well-thought-out decision space, this is perfect for players who want to go Full Hammond and start the park of their dreams.

Replicating one of our favourite scenes in cinematic history , the game lets you pit the InGen raptors against the wits of Bob Peck. Developed under the umbrella of the exceptional Mondo, the game is a popcorn fresh hand management tactics game, where manoeuvring and plotting are as essential as hunting down your opponent. And when you’ve discovered who comes out on top, you can bring in other characters from the series and find out how Robin Hood, Bruce Lee, and Sinbad stack up against the reptiles or see if Muldoon can bring down sasquatch. Quick, clean fun with an edge – this is great if you can find it.

Are there better games out there? Absolutely. Options that are easier to find and not fundamentally broken? Sure. Ones that let you control a pterodactyl, send dinosaurs stomping across the board and avoid pyroclastic lava flows?…perhaps, but there’s few games that hold a special place in our heart like this mid-80’s classic. An icon for reason, the game puts you into the pith-hatted role of explorers as you just straight-out try to steal gold from a forgotten civilization and end up getting exactly what you deserve. Players are burned alive, devoured, and worse as you scrap over the treasure. An exceptional nostalgic masterpiece and a fun game to throw on with a few beers, forfeits, and a timer. Trust us, it still has (possible feathered) legs.

Which is your favourite Dino game?! Tell us in the comments below 🙂