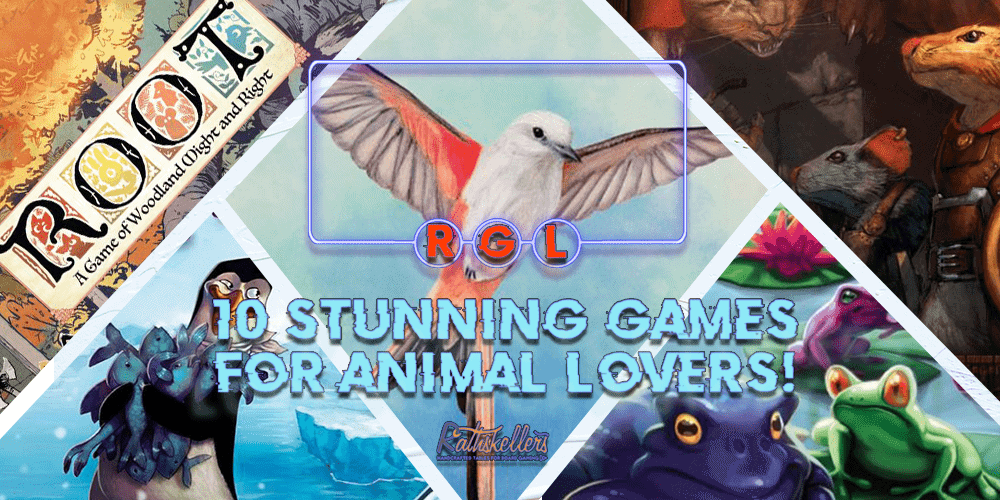 Few things go together better than fluffy pets and masses of cardboard. But, cats aside, the warm and welcoming world of board games is crammed full with a wealth of animals that can warm the cockles of even the most hardened 18XX player.

So, here are ten of our favourite games with critters at their core. Starting with-

A mainstay in many player’s top-tens for close to a year, Wingspan’s art design combines book-worthy illustrations with crunchy play that could keep the most demanding of players engaged. Now featuring birds from Europe as well as the Americas, the game gifts players with a wealth of options to help craft the menagerie of their dreams. And with hundreds of avian beauties to choose from, it’s difficult to find a game on the market that’s more of a complete package.

An often-overlooked small box from Renegade, Bullfrogs is an area control masterpiece that is literally about sitting on a log. Each turn lets players place new lily pads and put down cute wooden frogs from the token pool, shunting opponents into the drink, and securing key vantages. Featuring characterful design and fast paced play, the game is a delight for any swamp thing that delights in the beauty of the natural world. And, depending on the edition you pick up, a frog with a literal battle-axe.

A bucolic masterwork, Agricola’s ‘competitive subsistence’ gameplay asks players to maximise their plot to prove who the best farmer is. Grow barley for beer or harvest the fruits of the land to feed your family and optimise your output. Of course, that’s where animals come in. Players can raise sheep, pigs, cows, and the odd horse or two to create the farm of your dreams. While the game can be a bit of a table hog, it’s an incredible experience for all of who dream of owning their own ranch. Just don’t ask too many questions where pigsley ends up at the end of the game.

Featuring gorgeously rendered artwork from Draglis and a f*&^ load of cats, this recent Kickstarter success story sees players compete to save the most felines from a dangerous island. In-between shovelling armfuls of cats into a boat, players are required to manage their hands to secure the mousers of their choice, grab treasure, and slot polyomino moggys into their player space. But with each cat given a unique name and art, it’s impossible not to fall in love with your new family of bird chasers – making it a fantastic gift for players of all ages who hold kittens close to their heart.

Ok, bear with us here….Part of Uwe Rosenberg’s famous polyomino series, Cottage Garden switches out patchwork quilts for the quiet calm of creating your own English garden. Each turn sees players pick up gorgeously detailed plant tokens and plop them into your flower bed. These range from flowers, veg, and more. However, the true delight is the number of stylised napping cat playing pieces that are used to fill up blank spaces in your boards. Perfectly replicating the joy of napping in the warm summer sun, it’s no exaggeration to say that the pieces (literally) work tie the game together – proving to be a heart-warming delight for animal loving horticulturists everywhere.

Quick playing, instantly accessible, and unspeakably cruel when you think about it. Hey! is another Fantasy Flight success story that puts you in control of two characterful penguins seeking to – and you guessed it – eat all the fish. Taking place on a hex-based board, play involves moving your pieces from floe to floe and shattering the ice behind you. Before long, players are boxed in and players quickly find themselves stranded and drifting away from the play area and, presumably, certain death. Fun for all the family.

Another often overlooked small-box wonder, Songbirds was released in Japan in 2016 under the title of Birdie Flight and took the market by storm. Combining the tactics of Arboretum and the tight, fuss free gameplay of Love Letter – the game tasks players with “achieving dominance in the forest”. By which, they mean the card that has managed to collect the most nuts. Featuring beautiful card art and snappy play, the game is a perfect pick for two but extends to four – making it a solid call for a game over a glass of wine in the garden.

Recently reviewed by the wonderful SUSD, Ice Team pits two teams of coca-cola bears (scarves and all) in a race to the finish line, with both players aiming to snaffle up fish along the way. Light and breezy, while still enjoying significant tactical depth, the game is perfect for nature fans; particularly those with a taste for Disney quality character design. While reviews from the site generally send copies flying off the shelves, if you’re lucky, you can pick up this budget delight online today.

Combing the wonder of childhood fables with the brutality of the animal kingdom, Plaid Hat’s dungeon delving masterwork is perfect for those who love nature and see magic in the smallest things. Easy to pick up and coming complete with a dedicated campaign, M&M is co-operative delight that forces your party to fight their way through the King’s castle after being transformed into rodents. Scrap with roaches (goblins), rats (orcs), and even a cat or two (dragons!). Full of heart and ingenuity, it’s a perfect pick for groups of all interests.

Ok – so this one is added with the caveat that it features cute forest animals…waging war on each other. A favorite amongst players since it was first kickstarted in 2018 – the game instantly made its name through phenomenal symmetry. This pits players against each other to achieve their own unique goals and eventually save or subjugate the woods. Marry this with a wealth of unique cards with stunning player art, and animal lovers with be cooing over every turn. Well, until the vagabond trundles over and destroys your lumber mill. Then that little possum freak has to go.

Which is your favorite game for animal lovers? Share it in the comments below 🙂

We loved Root, and winning both expansions in the Summer Sweepstake would be awesome !