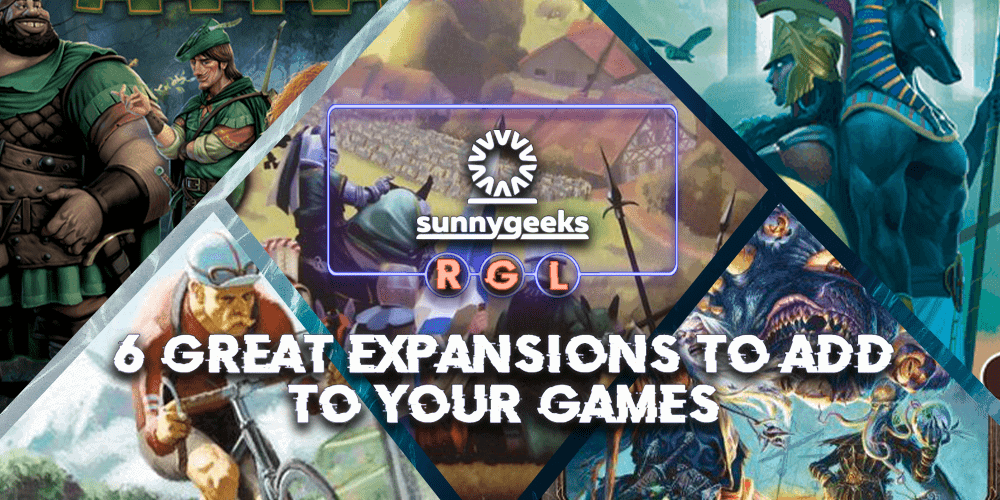 6 Great Expansions to add to your Games

Sometimes even a classic gets a little ‘meh’. No matter whether you’re facing down a dominant strategy, stale gameplay, or overfamiliarity, it’s a tragic day when you stuff your favourite game back on your shelf for good.

Thankfully, there’s a solution to hand.

Picking up a quality expansion can breathe new life into the most overplayed piece of cardboard. This can help expand your player count, add new mechanics, or tighten up gameplay to make things more competitive. But with such a crammed marketplace, it can be difficult to know where to begin when it comes to bringing some corners of your collection back from the dead.

So, here are some of our favourite expansions you can pick up today that can give your group an excuse to gather around the table again. Starting with-

When we use the word ‘essential’, know that we mean it. The original game was a stone-cold classic when it released in  2014, but it wasn’t long before the internet figured out an issue that – once discovered – broke the game entirely. While gameplay revolved around checking for contraband, the risk was quickly found to rarely outweigh the reward. This meant that selling non-illegal items meant that you were not only safe from the Sheriff but meant you could pretty reliably sail to victory with some savvy plays…despite sucking the fun out of the game. The exceptional Merry Men expansion fixed this by adding a black market and Merry Men power cards, finally giving players the incentive to go big and try and dupe the Sheriff and go big. While it doesn’t come with many bells and whistles, picking up a copy can expand your player count and let you play the game as the creators intended. Not a bad deal at all.

You can beat a bunch of rival civilizations in the desert, but how do you fancy your chances going up against a God? Ramping up the challenge in an already difficult game, the Ta Seti expansion switches the game to a ‘one vs. many’ marvel, with one individual taking on the role of everyone’s favourite jackal-headed deity and wreaking havoc across the table. Immensely overpowered, other players have to not only ally against their new enemy and pool their resources to stand a chance. For veteran players of the game, this quickly unlocks new utility in old mechanics and forces you to optimise your turn as you struggle to keep pace with the unique powers of their opponent. And with your own unique player pieces that pop on your gaming table, it’s as much an investment in aesthetics as anything else. While it lacks the machined elegance of the original game, breaking out the expansion guarantees a belter of a session every time.

When a game that originates an entire genre expands, you know you’re in for something special. A favourite of newcomers to the hobby and seasoned strategists alike, the Dominion series is arguably the gold standard for player customisation thanks to its seemingly unending of big and small-box expansions, all of which offer players options for tweaking their games just how they like them. These can include the infamous Intrigue set that allows for increased player interaction and makes victory cards valuable tools for achieving victory as well as a goal in themselves. For those who love long-term planning, the Seaside box’s duration cards allow for clever combos and additional turn flexibility. And for those looking for a mix of items to pick from that can change the whole setup of the game, the Cornucopia set’s perfect for you. Spoiled for choice? Absolutely.

A lot of us spend time looking for the perfect pick up and play game. And for those that love a head-to-head duel, many would argue that 7 Wonders Duel heads out the bunch. Fast playing and highly flexible, the game offers a fresh challenge with every opening of the box. But if you’re a seasoned player looking for additional depth after your fiftieth game, that’s when you reach for the Pantheon pack. This exceptional duel adds the Gods into the mix, letting you petition a range of Greek, Egyptian, and Middle Eastern deities for help that can grant invaluable extra player powers. These are all thematically appropriate with Roman gods improving your ability to wage war on your enemies and Egyptians deities helping with wonder construction. This adds a just enough complexity to the game to let you massively vary your strategy while also preventing the hate-drafting that can leave you feeling restricted by your opponent. And with the forthcoming Agora Expansion coming out soon, there’s no better time to get your sandals back in the game and take your opponent to task.

Sometimes expansions can be exhaustive and redefine a game entirely. But sometimes a small expansion adds just what a game truly needs. Released in 2017, the Peloton pack added the perfect amount of additional content to the game. This included an option for a dummy ‘chase’ group to add spice to multiplayer sessions while also adding an additional two players to the mix – pumping the max count to an insane six. The game also added extra terrain to make your tracks even longer and more complex with cobbles making the game’s longer stretches a living nightmare. And if that’s not enough, picking up the Meteo pack allows you to add crosswinds and weather conditions as variables that can add spice to even the shortest of races.

When it comes to introductory games, few are better than Waterdeep. Offering easy-to-access worker placement, the game gently eases newcomers in with an approachable theme and a gorgeous art-style. But, once you’ve taken victory a few times, sessions can run the risk of feeling a little samey. Thankfully, Wizards of the Coast have come to the rescue with the stunning Skullport expansion. This adds two modular elements to the game through the brand’s infamous Undermountain dungeon and the infamous Skullport bar for players to visit. This allows players to rack up the points with difficult quests or risk taking on corruption that offers seriously tempting rewards and the sliver of hope of clearing it from your board. Elegantly implemented, beautifully designed, and easy to introduce – no copy of the game is complete without the expansion nestled beside it.

Which is your favourite game expansion?! Share it in the comments below 🙂