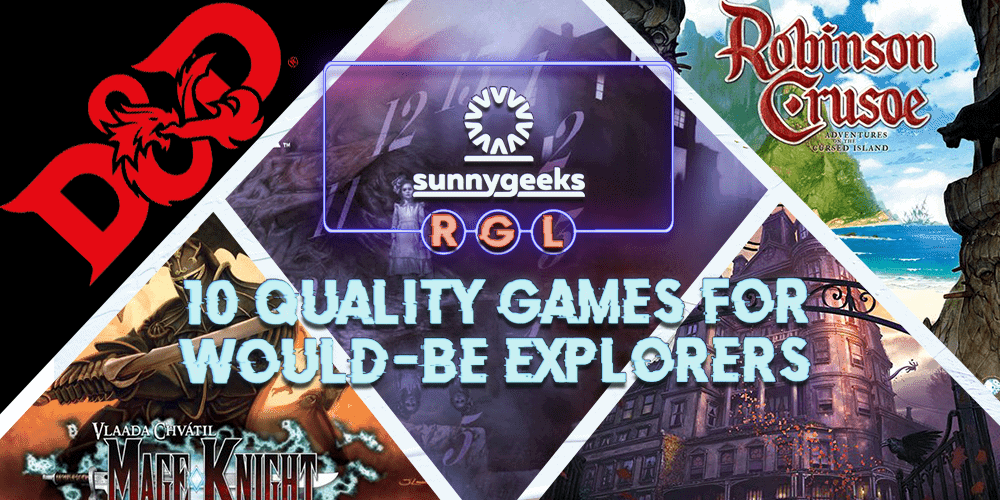 Whether you’re keen to experience the pure joy of exploring somewhere new or create a new world with some friends, board games are fantastic ways to live out your dreams.

So, here are ten of our favourite games that let us scratch that journeying itch, starting with-

A well worn addition to the list, but a classic for a reason. Charging you with managing the placement of castles, roads, and fields of the region – players enjoy a silky smooth playing loop that sees your kingdom slowly takes shape. A farmer resting in a field here, a robber on the road there, and even the odd passive-aggressively completed castle there. Throw in any of the game’s wealth of expansions and you quickly end up with a unique map that tells its own story…before being quickly broken down and played again.

Ever wanted to star in your own horror series? Dream no more. Building on the rock-solid foundation of the Betrayal board game, this iteration’s legacy components let you and your players act out the history of your long suffering family in a spook-house you name yourself. With myriad twists, turns, and terrors – every one of the thirteen games you play lets you put a unique stamp on future games. Whether it’s recurring characters, plot points, or the odd beast or two – picking up a copy lets you explore a unique story you’ll share for the rest of your lives. However long they may be…

Keen to take a trek through a classic 80’s fantasy dungeon, Fantasy Flight’s masterpiece has you covered. Based off the third implementation of the series, the latest version lets you and a few friends trek through the randomised board to reach the centre of the map. On your way you have to avoid deadly traps, fearsome monsters, and keep on your toes to collect all the loot you need. Because once you’ve made your way in…you have to safely creep back out again. Promising a different adventure each time, this no frills delight is perfect for anyone who wants their own custom dragon-infested dungeon in a box.

The peerless game series finally makes its way to the tabletop, allowing you to truly get to grips with one of those four x’s. Offering a refined take on the previous entry in the series, this places greater emphasis on early exploration, with each player’s civilization eking their way onto the randomised board and taking advantage of the opportunities that await them. Each game begins with a frenzied rush to claim land and snagging or scrapping over vital resource spots, letting you peacefully push toward cultural victory…or pick up a sabre and cut that forest to the ground.

Another exceptional offering from Adam Kaluza, where K2 dealt with the majestic terror of a mountain range, the cave grapples with the claustrophobic rush of mapping a photographing a randomised subterranean system. Working from your base camp, players are required to carefully manage their action points as they pick their way through the system, without any ability to plan for what they’ll find ahead. Deep descents, freezing water, or the moment of fear as the batteries in your torch blink out. Anything is possible, and hopefully you’ll all make it out alive to share the story.

Fancy trotting out on your own homespun fantasy adventure as an absolute killing machine? Well, turns out WizKids has a game for you. An icon in the gaming world, Mage Knight is renowned not only for the depth of its combat but the sheer scope for exploration that each game affords. Every time the modular cardboard tiles hit the table, players are met with a new world with its own challenges, monsters, and magic items that can turn the tide of a battle or leave you crushed under foot, hoof, and catapult. Though the game may be hard – or at least too brain burning – to complete in one session, our range of recessed gaming tables makes saving your progress and giving your travels the care an attention they need a breeze.

Another Legacy game makes out list, and with good reason. The trailblazer for the series, when it was first released in 2011 – the game takes place in a futurescape where each battle tactically and physically effects the last. Five or six games in and you’ll have named continents, stuck stickers across the board, and started down the path of hidden narrative that unlocks the hidden secrets the game has to offer. And with the rules explicitly asking you to destroy any cards you no longer need; you’re quickly locked into a journey there’s no turning back from. And one that may have a far from happy end.

There’s nothing quite like the joy of stepping into a haunted death-trap with your friends…and just not knowing what’s going to happen next. The latest implementation of Fantasy Flight’s Lovecraft line, the default game contains four scenarios that features a wealth of clues, horrors, puzzles and more – letting you unlock the terror at each site. Add in the fact that a dedicated app removes the burden of admin from your group, and you’re set for the perfect night in exploring the last place on earth anyone would ever want to stay.

A game that defies explanation, Crusoe washes you and your friends up on a deserted island and leaves you to fend or yourselves. With six separate scenarios to choose from, the game is meaty enough to ask players to improvise and deal with the brutal challenges of being stranded in an unfamiliar land. Treasure, mystery, and a nearly unending series of events ensures that every time you wake up on the shore will be different from the last. And with a range of expansions available, there’s always more story to hear.

Really, there was no other option, was there? A timeless masterpiece for collaborative storytelling where the only limit is your imagination…or if you remembered to slip a silver dagger in your boot for fighting that werewolf. Letting you draw inspiration from a range of award winning source books, improvise an adventure, or while an evening away coming up with the perfect custom dungeon; the 5th edition rules are perfection for those looking for an adventure. And with the starter kit giving you a perfect jumping off point to create your own tales together, there really is nothing stopping you from sharpening your swords and setting out to lands unknown.

Which is your favorite exploring game? Share it in the comments below 🙂