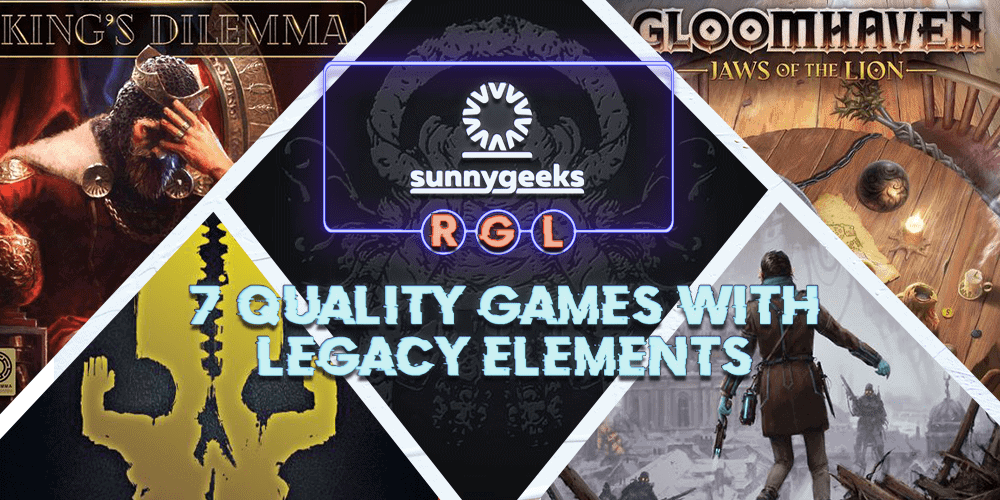 Legacy games are a fantastic way to spend time with a dedicated group. But while the series is great, messing about with Pandemic, SeaFall, or the rest of Rob Daviau’s line can become a little samey before too long. And the commitment to complete the same game time after time does run the risk of quickly wearing thin.

So, here are some of our favourite games that dabble with the legacy formula and come up with something truly new. Starting with-

A staggering accomplishment, Richard Garfield’s Netrunner re-emerged in the middle of 2010 firing on all cylinders. While reviews were flattering, it wasn’t long before the game succumbed to the card bloat that plagues many collectible games. But before the line shuttered, Fantasy Flight released a cracker of an expansion through the iconic Terminal Directive. A full narrative campaign, the game took the series’ card play mechanics to new heights with a hunt for a murderer in the streets of a neon-infused future. Along with adding new cards and elements, each game let players slip into the identity of suspects and make decisions that reached far beyond the table. A fantastic experiment, it’s well worth digging out your copy or mining eBay for an expansion today.

Inspired by the phenomenal worlds dreamed up by Steve Jackson’s Fighting Fantasy Series, 7th Continent brings exploration and storytelling to the tabletop. Essentially a colossal ‘choose your own adventure’ book, 7th is stuffed to the gills with secrets to unearth, monsters to conquer, and traps to defuse. Easily expandable, the game is perfect for mixed ability groups who may just not feel as confident when it comes to playing more demanding or tactical games. This lets groups easily pick up the game and run with your adventure, or add any number of expansions to the mix to help keep thing fresh – making it perfect for spreading out on your home gaming table or hopping on Zoom and playing with your mates.

Who knew that pressing grapes would lend itself to such a stunning series. First released in 2013, Jamey Stegmaier’s success story captured the minds of oenophiles and gamers everywhere, proving to be a Kickstarter success story and spawn a wealth of expansions. And then along came Tuscany. Released no more than a year later, this expansion famously kicked the game – and its complexity – into overdrive. Designed to be played game-after-game, the box drip fed new rules and functionality to your games. Replicating the growing complexity of running a vineyard, the game brings seasons, visitors, and more into the mix. This makes it a perfect on-ramp game for players that may struggle with learning too many rules at once and those that are just desperate for an excuse to enjoy a nice glass of plonk.

While Game of Thrones sadly ended after season six, those that are true fans of politicking, backstabbing and murder have something special to look forward to. Putting you into the slippered feet of members of a king’s council, play involves bending the monarch’s ear and making the best possible decision for the realm…and for you. Played out while you and your friends barter and discuss how to deal with the kingdom’s ‘dilemmas’, your group runs the risk of tipping the realm into war, famine, ruin…and worse. With kindest act rarely going unpunished and the cruellest decisions rewarded in the most unexpected ways, this is an exceptional gift for players that want to plot, scheme, and lie your way to glory.

A dungeon crawler in the most literal of terms, 2015’s Kingdom Death was infamous at the time for its brutality, unsettling worldbuilding, and some of the most…unique miniatures sculpts on the market. Literally hurling you into the abyss and expecting players to keep up, the game throws challenge after challenge at you and your fellow survivors as you struggle to build a camp and survive in the blinkered darkness. With a dedicated story system, surprisingly effective monster AI deck, and a campaign that can stretch from 5-30 in game years – it truly offers something unique for the right group. And with a range of expansions available to players, it likely won’t be long until you’re smashing White Lion groins with the rest of them.

Recently released to rave reviews, Isaac Childres’ genre defying masterpiece has been chopped down to size to the perfect entry-level box. Acting as a prequel to the original game, Jaws offers a 25 mission long game designed to help players learn its infamously inaccessible older sister. Crammed full of content, this tutorial (and then some) in a box lets you roll up a bunch of new characters and learn more about the history of Gloomhaven – with each session developing your skills and influencing the next. Designed to be quick to pick up, early missions introduce players with ease and, before you know it, your group will be finished with the box and ready to move onto the main campaign.

The most infamous game in Christendom just keeps on giving. Following in the wake of two stellar expansions, Stonemaier have done it again with their third (and as of writing, final) addition to the much loved economic masterpiece. Picking up in the aftermath of the war that preceded the game, Fenris offers a dedicated campaign that takes players through an eight campaign series of missions that contains persistency, unlockable extras, and a shocking conclusion. And, once you’re done- you can play it again! Fully customisable and highly replayable, the game adds a wealth of modular functionality to the game to help provide a playstyle that suits. Exceptionally generous and bursting with new, innovative content, the series ends of a (hopefully unexploded) bombshell. And we can’t wait to see what the team comes up with next.

Do you have any other legacy games to recommend?! Share it in the comments below 🙂

Now that’s some games I have to try!

I really wanna play Kingdom Death! But already got so many games, and if I start buying that it will be quite expensive to get everything and takes a lot of space ﻿????﻿

I like 7th Continent, it seems repetitive after a while but definitely a unique and challenging puzzle

7th continent sadly was a letdown for our group due to the way turns were handled.. it just was more useful to let 2 people take multiple turns and let the rest sit out most of the time

Gloomhaven is a must have 🙂 still loving the base game + forgotten circles at the moment.

Kingdom death is really Epic and punishing at once ????. Exciting to see the gambler chest which is coming…someday ????