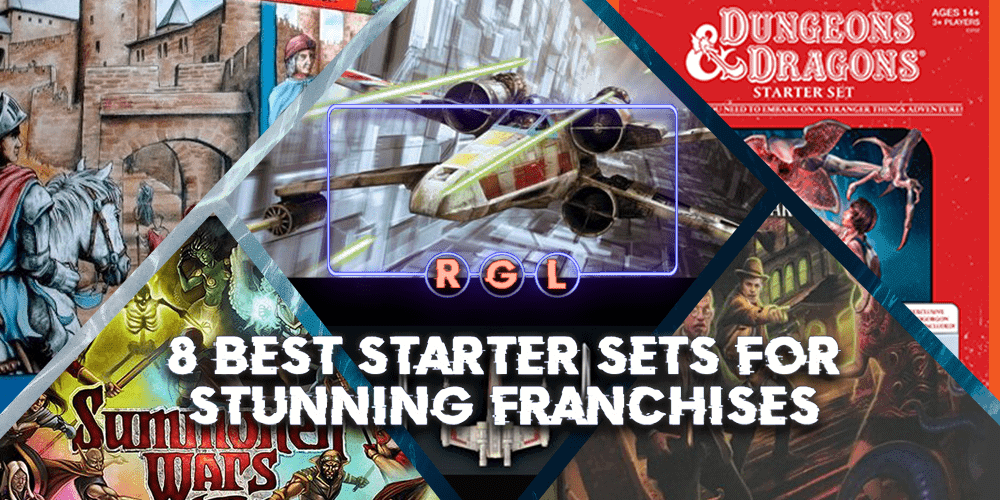 Picking up a new hobby can be intimidating, but it doesn’t need to be difficult

No mater whether it’s getting to grips with a challenging meta, getting enough ‘game’ to enjoy your experience, or just grappling with cost – finding a quality starter set can help you quickly learn if a game is ‘for you’

So, here are some of our favorite boxes that let you hit the ground running. Starting with-

An unabashed classic, Plaid Hat’s flagship series paved the way for the company’s many successes. And while collectable card games can be tough to get into, Alliances offers everything you need in one simple (and surprisingly affordable) box. A tight, perfectly balanced battler – players are put into control of their unique summoner and manage their deck as they bring creatures into play and take their opponent down. Building on the lessons learnt from the previous release of the game, Alliances use hybridised factions that allow for characterful and unique plays. A must buy, especially if you like the sound of pummelling your opponent with your ‘Cave Filth’ team.

Ok, let’s just get this one out of the way as early as possible. Infamous for being a gaping time and money sink, the Magic series is a rite of passage for gamers throughout the world. And a bunch of them stick around after their first few games for a very good reason. Since the release of their Duel Decks line, the Magic team have done an exceptional job of producing pre-built, ready to play decks at an affordable rate. For those looking to dip their toes, this year’s 20th anniversary pack promises the best magic has to offer with a Green/Black face-off that will let you (very) quickly know if it’s the game for you.

What’s better than one of the most streamlined, tight games of all time? A colossal box containing all the expansions you’ll ever need for it. A strange study in restraint and excess, this beauty contains the iconic base game and a litany of expansions that allow players to fully tailor their experience. Simplicity itself, Carcassonne asks players to pick up and play a tile to their grid – letting you place meeples for points and offer a surprisingly degree of strategic game. While the game is perfect on its own, adding a few expansions can help add value to your sessions including the fantastic Inns & Cathedrals, Traders & Builders options. Pick it up and be very, very pleasantly surprised.

Looking to dip your toe into the world of roleplaying and have a taste for the spooky? It’s impossible to do better than this exceptional intro pack released by Chaosium in response to renewed public interest in the iconic roleplaying game. The box includes all the papers and dice necessary to play and three distinct scenarios to whet your beaks (or tentacles), including the iconic ‘Dead Man Stomp’. The game even includes a one-player adventure to help future Keepers learn the ropes and help prepare for the litany of issues players will present them with.

While the latest Star Wars film may have had few redeeming features, there’s no real substitute for belting into your X-Wing and blasting some TIEs out of the sky. Now in its second edition, the officially licensed miniatures game perfectly walks on the knife-edge of accessibility for players looking to assemble their own squadron and take on their opponents. While the starter set only contains three ships, these are more than enough to recreate your favorite dog fights and use your positional and tactical nous to out-manoeuvre your opponents. Though, if you’re looking to expand your collection, it’s essential to deploy on a table that’s truly fit for purpose. Or if you prefer to go up in scale, the equally brilliant Star Wars – Armada lets you control your capital ships and disintegrate rebel scum with ease (albeit it a significantly bigger price point).

Games Workshop, you’ve got to hand it to them. A stalwart of every British nerd’s Christmas list since the 80’s, the company has taken a fresh approach to their famous starter sets that has seen them fly off shelves. Broken into three tiers, the company’s Recruit, Elite, and Command sets offer a full-fat game experience with a range of models, scenery, and extras. This lets hobbyists enjoy a full encounter at the introductory level and a full pitched-battle at the top level. If that doesn’t float your land-speeder, their conventional Warhammer, Warcry, and Kill Team sets also have starter options – letting you play with your friends before shelling out the big bucks on your favorite army.

A miniatures game that’s crammed with character, easy to learn, and quick to play, you say? Combining hex based movement with gorgeous sculpts, Godtear came out swinging when it was released last year. The game does away with complex terrain and cover rules and offers a quick, faff-free playing experience that genuinely feels like a step in the right direction for the genre. However, with so many teams and options it’s a pleasant surprise that Steamforged have released a pair of two-player starter sets that allow you and your friends to get into the game and give it a try before upgrading your experience.

Ever since the release of the first red-box starter set in the early 80’s, D&D has been the gold standard for players looking to dip their toe into the world of roleplaying. And with Netflix’s beloved series paying homage to the beloved series, it was only a matter of time before Wizards decided to produce a tie-in game. Letting you play through the custom game created by the show’s protagonists, you can take on the Demogorgon…and maybe put the show on the background to experience the adventures of the greatest hero of all.

What is your favorite starter set?! Tell us in the comments below 🙂

D&D was so rewarding when I was young.

Nice. There are so many games that have a confusing and over-saturated path to entry. Good to see you offering some straightforward insight

The new Dominion Starter Set for Warhammer Age of Sigmar is gorgeous. I told myself for a few weeks that I wasn’t going to get it. I have about 25% of it put together now

X-Wing had to be one of the more expensive games I’ve gotten into, but it was worth it. The cool friends I’ve made along the way and the diverse gameplay makes it a game that hits the tabletop quite often. Highly recommend!

It’s SO tempting to join… if I do, may the force be with my wallet.

Definitely agree on Carcassonne to start your board game addiction hobby. Even with just the base game, it is forgiving enough for you to learn the rules, and to master the mechanics to play more strategically. I do also recommend buying at least some expansions after playing the base game a couple of times, as the new mechanics really add interesting dimensions to the game.

Especially with Carcassonne, I wanted to play the game all the time, as soon as I grabbed the few first expansions.