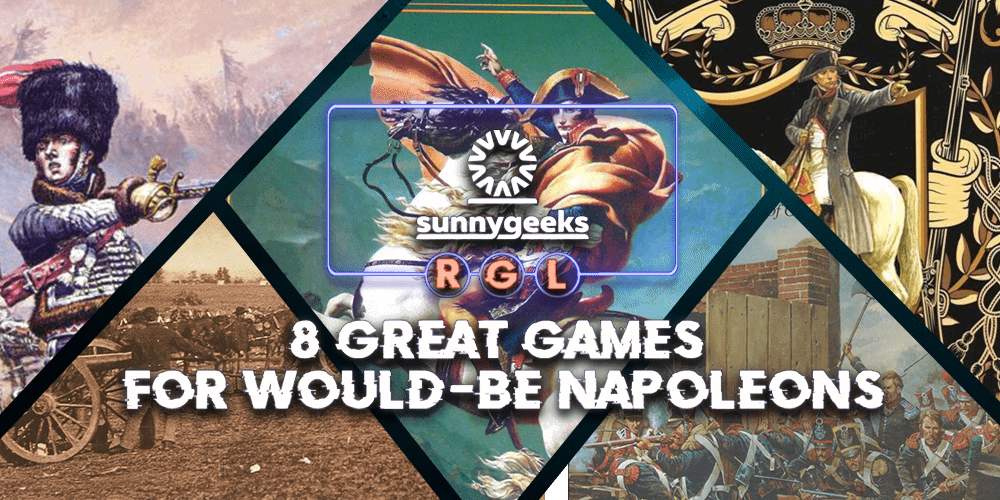 One of the most infamous and iconic figures in history, it should come as no surprise that the figure of Napoleon and his military conquests dominates the world of board gaming. But when it comes to finding a game that marries strategy, tactics, and the feel of being a globe conquering despot; you can have your work cut out for you.

So, here are eight of our games that let you recreate an age of gunpowder, sail, and cannons. Lots and lots and lots of cannons…starting with-

Starting us off with a bang, the command and colours series is legendary for combining accessible play with strategic depth, with the Colours Series allowing you to scrap in the age of antiquity, the beaches of Normandy, or the blood-soaked fields of Westeros. Letting you re-fight the authentic battles that defined his career, Napoleonics recreates the fog-of-war that plagued historical battles through the use of a dedicated card system. This requires players to feint, bluff, and charge with the best of them – taking your troops, terrain, and tactics into account before shattering your nemesis with a cannon.

A box that has Vlaada Chvátil’s name and Napoleon’s/Mads Mikkelsen’s face emblazoned on it? Count us in. A highly involved strategic masterpiece, ages asks players to build up their civilization, slaughter their opponents, and cement their victory through card drafting. Described as ‘epic’ for a reason, players are given a gamut of options to choose from as they develop their economic engines, utilise their leaders, and develop the technologies that can help crush the opposition. While playing the digital version may be the best way to learn the rules, Ages is one of those games that will stay in your collection for a long, long time…

Ever wish that Risk was a little more substantial? Dream no more with this cult classic from Glenn Drover that seats up to a gargantuan seven players and everyone will be required to stem the tide of the Frenchman’s armies. Featuring gorgeous art design and the game’s now iconic three-tier rules that dictate just how complex you want things to be. This can stretch from a risk-lite style scrap over the game’s gorgeous, table dominating map, or become a detailed tactical barrage. One that has players agonising over their move and the use of Political Action Points that allow players to slink around the battlefield and recreate an age where guile was as important as gunpowder.

Ok, while our favourite Frenchman may be absent, Gettysburg is an essential pick for tabletop strategicians for a reason. Recreating one of the most pivotal and bloody battles of the American Civil war, Gettysburg uses card-based combat to remove luck from the equation. Stunning art design and tactical depth creates an experience that feels like you’re poring over a map in a tent, with weighty wooden blocks, geographically accurate maps, and a sense of tension as you balance your supplies and are never really sure what your opponent is capable of.

Ah…Field Commander. The gold standard for military boardgaming for many, the series pulls off the trifecta of providing simple rules, tactical depth, and a sustained military campaign that recreates the statesman’s long march to victory…all without requiring a second player. While some may choose to break out Total War: Napoleon, this offers a physical alternative that lets you drill through all of the ruler’s eleven campaigns. This takes a helicopter view of the combat and requires you to puzzle your way through and maybe invite a friend or two along for the ride to make it a co-op masterwork.

Can we resist referencing Master and Commander at this point? Yes, but also, very much no. The Napoleonic era’s emphasis on punishing ship-to-ship combat has always translated well to the world of tabletop and Sails is close to the cream of the crop. Built around beautiful plastic miniatures, players use cards and dice to track movement, volley fire, and uses simultaneously movement to recreate outthinking as well as outfighting your opponents. Looking gorgeous on the table and terrifying when puzzled over, picking up a copy is a must for any fan of naval tactics.

Now we’re onto the hard stuff. If you’re a fan of painting and collecting miniatures, the Powder series should be a familiar sight. A collected set of rules that allow you to cultivate and customise your own bespoke regulations. As complex or streamlined as they need to be, the latest release builds on the ground broken by Well’s Little Wars and, as you’d suspect, is full of the kind of fluff and texture that comes with any work from Games Workshop’s Jervis Johnson and Rick Priestly. Concise, gorgeously presented, and very, very refined – it’s the perfect pick for the wargamer in all of us.

Set at the iconic battle at Austerlitz, the game deploys the Field Commander system to stunning effect as it crams a wealth of tactical decisions into a game that can be finished out in two hour sitting. Coming with a stunning double size map, the game recreates the wheeling battle with commanders, supply lines, harried communications, and the fog of war that benefitted Napoleon on the day…but may prove to be a thorn in his side this time. Quick to learn and offering stunning tactical depth, for many this is the definitive ‘Napoleonic era’ game and can lead to a lifetime of pushing lead figures around on felt boards. Or it could just be an exceptional addition to a collection that can be played out of the box by anyone. After all, maybe it’s three forces that unite men – fear, interest, and watching your friend set down their cup of tea in defeat as you shatter them with a cavalry charge. It’s the simple things, isn’t it?

What is your favourite game about Napoleon?! Tell us in the comments below 🙂