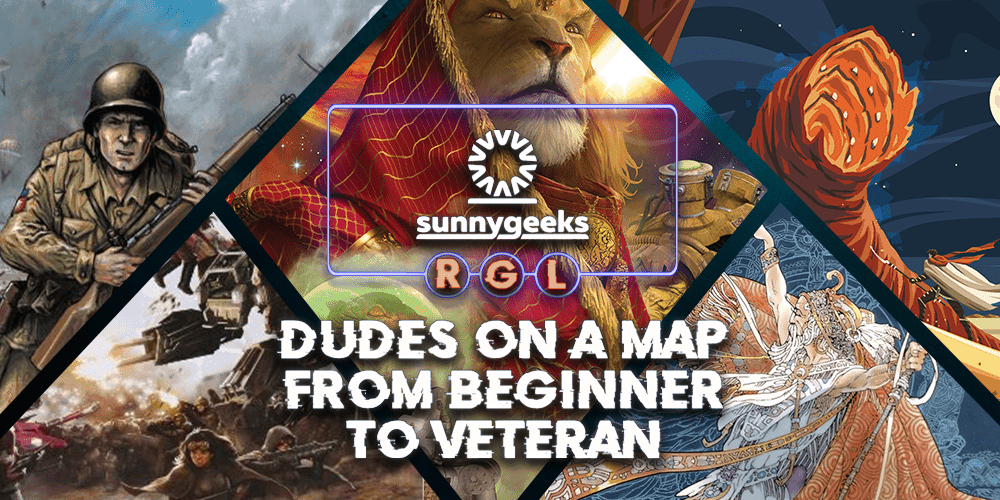 Dudes on a Map -> From Beginner to Veteran

Combining strategy, tactics, area control and more – the ‘dudes on a map’ genre is as beloved as it is evergreen. Encompassing almost every corner of the hobby, getting players on board can prove to be a bit of a challenge.

So, what exactly is ‘dudes’ game, what makes them fun and what can you pick out to play depending on your group’s experience level?

For many players, DOAM games are amongst the first that they play – with Chess technically being a variation on the theme. Highly familiar to players, play often stops after these early encounters. This leaves players missing out on some amazing opportunities for play.

Do you prefer political manoeuvring, how about pitched strategic battles, how about long term are control and unique player powers? No matter what you fancy, there is an option for everyone. Whether you like closely pitched scrabbles, tactical slaughterfests, something that pushes the limits of the genre, or just a game to chill with over a glass of wine – few genres of tabletop game offer so much choice.

But there is a catch.

With so many models and moving parts, new players can be intimidated by the amount of plastic and board space on play – with many games requiring a dedicated gaming table or large playing space to house all of the game’s components.

However, taking the time to find the right table for your players can help make all the difference, ensuring that you’ll be scrapping it out in no time at all.

What should I play?

Beginner – Risk: Or if you want to try your hand at something more demanding, Risk is the way to go. Chances are that you already have a copy in some dark corner of your house. Quick and simple to play, players are required to hold as many victory points as possible or – if you’re going by family rules – wiping out all of you opponents. Quick and simple to play, Risk teaches the fundamentals with ease and is perfect for a casual evening with a few beers and a multi-turn timer. Or if you want to have a more interesting opening, picking up a copy of Condotierre is perfect for any group, or the more complex Risk: Europe, or – when you get a few games under you – the ground breaking Risk Legacy.

Casual – Memoir 44: Now things are starting to get interesting. First release in 2004 and never out of print, Memoir 44 pares down the Command and Colors ruleset to make it accessible to anyone. Pitting axis against allies across a range of modular maps, Memoir is the perfect next step up for players looking to take their tactics and strategy to the next level. With just enough complexity to make is accessible to the normal player, before long generals will be planning artillery barrages, smashing through barbed wire, and carrying out tank raids with the best of them. And with an embarrassment of expansions available to try, you can quickly add variety to your game without ever having to worry about complexity or inaccessibility.

Seasoned Players – Inis: Moving onto something that’s a little more complex. Inis’ rules drop the dice present in Memoir and Risk and replaces them with a hand of cards. This makes the game a dream to teach – with players learning what they’re capable of within one or two rounds. However, what’s possible is a different kettle of fish entirely. The sheer volume of options available to players unfolds turn after turn and force a game of positioning over direct conflict. And with one of the victory conditions tied to having other players on the map, the game truly opens the genre up to show exactly what is possible. But when it comes to something truly different-

Expert –  Dune: While Game of Thrones may be the choice for many courageous, long-term players, Denis Villeneuve’s forthcoming film stands to take the place of the game in people’s hearts. Perfectly replicating the politicking, conflict, and gambits that cover the planet of Arrakis. Player’s take on the roles of each of the series’ powerful houses and do their best to wheedle their way to power. However, each house is symbiotically tied to one of the game’s mechanics, giving them incredible leverage and requiring in-depth knowledge to beat – making it a truly exceptional game to play time and time again with the right group.

Veteran –  Twilight Imperium: On its fourth edition for a reason, Twilight is seen by many as the apex of the dudes on a map experience – replicating a galactic tug-of-war over the planet of Mercatol Rex and the planets that surround it. Offering an A+ grade experience for those who are fans of 4X strategy, each game begins with a unique board state, random events, a different melange of opponents and more. The use of public and secret objectives helps players vie and keep scheming over the course of a game that devours days, if not entire weekends. Build your fleets, probe, the cosmos, obliterate your opponents – the future of your game is very much in your hands…or appendages, depending on who you play. Essential to be experienced once in every player’s life, Imperium is as much a rite of passage as it is a game.

Are you a beginner or a veteran at “Dudes on a map” games? Tell us in the comments below !

Chaos in the Old World and Starcraft are definately missing here ﻿????﻿﻿﻿

I love that you included chess as DOAM!

Runewars is probably one of the best games in this genre to me. Multiple ways to win, gameplay layers that all can contribute to the outcome, multiple factions to play as, and a pseudo-randomly generated world that keeps things fresh with new tactics to assess and employ. The expansion also enhances this game and the strategies from each faction.

My kids just got introduced to this concept with History of the World. They loved the game!

My favorite games are strategy games I like Dudes on a Map genre.