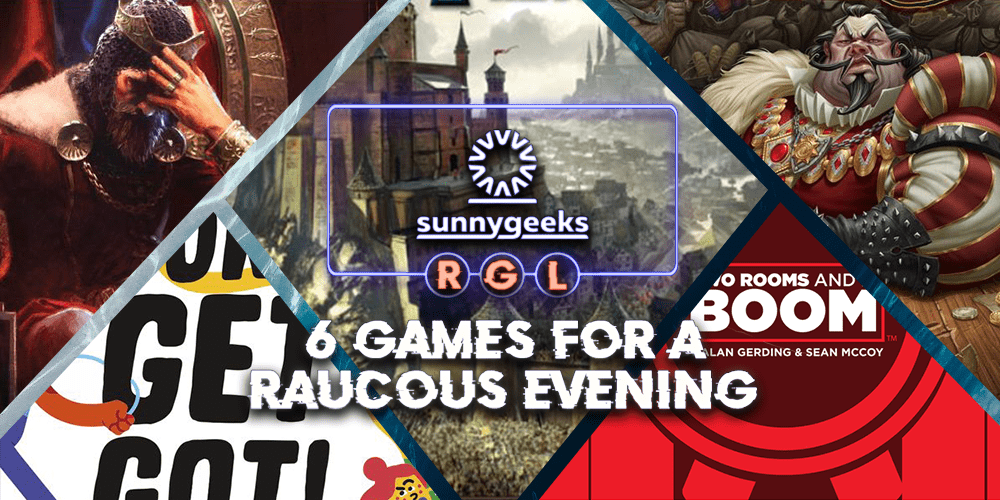 6 Games for a Raucous Evening

Sometimes it’s more important to have a good time with your friends than enjoy a gruelling night of gameplay. While the hobby has a wealth of games available, the imposition of rules, turn tracking, and other elements can take the electricity out of the room when dealing with newbies or those struggling with tiredness after a long day of work.

Thankfully, there are many options available for those looking to enjoy a boisterous evening without having to lose momentum due to rules.

So, here are some of our favourite games that’ll get the party bumping for everyone. Starting with-

If you’ve ever dreamt of bellow “GET DOWN MR. PRESIDENT”, you’ve come to the right place. Publisher by Indie Knight games in 2013, Boom quickly took the market by storm as a the rare ‘gamers’ game that would fit into any get-together. Played between two rooms (surprise, right) with a moderator, the group is divided into two teams – red and blue – and allocated a number of secret roles. On the blue team, the president; red, the bomber. The game then sees ‘hostages’ swapped from room to room with roles remaining secret – with an end goal of stopping the president ending up in the same room as the bomber by the time the session ends. Before long, the group will be quarrelling, bickering, and lying as they attempt to outfox the opposition and secure the (potentially messy) ending they want. Throw in a wealth of bonus roles at add spice to the mix and it’s tough to see how it could be better.

How secretive can you get?

Never mind being a bodyguard…what about occupying the stylish shoes of a secret agent? Released in 2018, Don’t get Got is arguably the ultimate party game that sees players vie to pull off the most secret stunts in a session. Each session begins with players being given a literal wallet that contains a series of missions they need to pull off…without being found out. These range from tricking a player into cleaning your glasses for you, getting them to try on your jacket, or other options that are as specific as they are tough to pull off. Built to be played in the backdrop of an ordinary party or games session, DGG is an exceptional pick for the right group. And with SUSD having released a Kickstarter version of the game with heaps of bonus content, there’s no better time to give it a go today!

Are you fit for smuggling?

Ah, now we’re really getting into the classics. A medieval version of border security, Sheriff allows a rotating player to take on the role of the eponymous official and stop players from smuggling contraband over the border. Each turn, players load their physical bags with tokens from their store and put them up for review by the sheriff, who then decides who needs to be inspected. However, the game actively encourages you to bribe off the lawn man or pay for your friends to be inspected in your place. Before long, your table will be exploding in laughter and accusations. And the look on the sheriff’s face as he pops open a bag and discovers a bushel of perfectly legal apples has to be experienced once in a gamer’s life.

Who will claim the Iron Throne?

Ok, personal disclaimer. This game may be the one that times the balance between raucous laughter and someone diving over the table and bringing the rains of Castamere down on someone else’s face. Perfectly replicating the strategy and politicking of the books, the game sees players take on the roles of Westeros’ great houses and vie for dominion over the land. And while there can only be one true winner…it’s impossible to get ahead without forging alliances and, inevitably, breaking them. This makes it a great source of table-talk and playing mind games as you and your friends carve their way across the map. However, it is important to remember that – while the game can bring the most sedate group to life – the degree of rules admin and edge-cases can derail many strategies or stump new players. Making sure that your group is comfortable with play is almost essential. And if you do get stuck, it may be worth having a simpler, quicker playing game up your sleeve in case Fiona put’s Justin’s head through the wall. But if you’re looking for something equally thematic but a little more conflict adverse-

Court politics in a box

If you’re looking for a table full of carousing and contemplation, you’ve found it. Replicating the intrigue of fantasy court politics, Dilemma follows semi legacy model as your group makes decisions that benefit the crown…and yourselves. For those of us who lament the end of a certain show this is a fantastic opportunity for you and your group to get together and create your own story that respects your group’s intelligence and lust for power as decisions from five games ago come back to bite you on the arse. Full of arguments, justifications, and bickering – it isn’t long before your table resembles a heated political debate. Playing with the right group with the right table (and soundtrack) can help get you in the mood fast! Simple and quick to play, the game is even a great choice for larger groups as team members can double-up on decisions and make choices that won’t see your king decapitated. Well, at least for this session.

The one that started it all

Arguably the mother of all party games (well, for sixty years at least), Diplomacy is a beloved favourite for a reason. And it’s not because a game ends peacefully. Replicating the push and pull of global politics, the game replicates the power struggle for Europe at the turn of the eighteenth century – with moves taken passed to a moderator and carried out in unison. This means that, despite being a dude-on-a-map exercise, the true meat of the game is in secret meetings between rivals to forge alliances…and the howls of agony as deals are broken as moves play out.  Due to its simple nature, Diplomacy is the perfect game to play remotely through email and a corresponding chat group. This makes it a fantastic quarantine game to play with a large group of friends…or what will soon become former friends.

Which games do you recommend for a raucous evening?! Share it in the comments below 🙂

I have not played any of these, but King’s Dilemma looks awesome.

I love Sheriff of Nottingham, but I play with an absolutely abysmal group of liars (myself included) so it ends up being an exercise in honesty. Pretty sure that wasn’t the intended play style.

I hear Diplomacy is a relationship breaker! 😉

Have played a bunch of Two Rooms and a Boom, am excited to play my friend’s SUSD copy of Don’t Get Got, have played Sheriff of Nottingham a fair while back, have yet to play Game of Thrones despite owning it, am currently amidst a King’s Dilemma campaign (8 games in?), and am keen to play Diplomacy!!

Don’t get got is great fun – we still wind my sister up by asking “guess what?” even when we aren’t playing the game