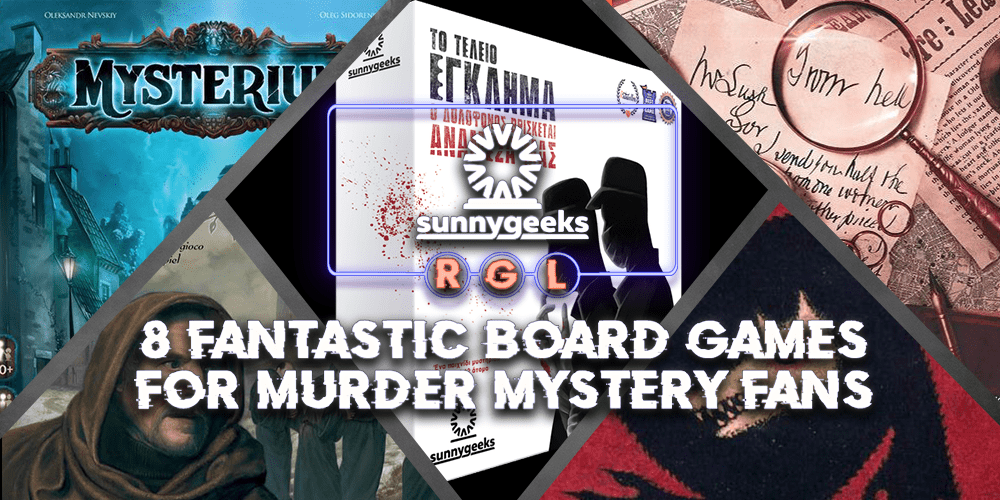 Death. Everyone’s favourite theme for a boardgame night. From Poirot to…ahem, Poirot. The years have shown that audiences love a bit of a murder mystery. And while there are entertaining options on our screens and books – the real magic appears on our tabletops.

Murder mystery games are a great, self-contained way to spend an evening.  And whether you like to peering through the London fog, unpicking contemporary crimes, or touching the supernatural – our hobby has you more than covered.

So, here are eight of our favourite games that let you exercise your little grey cells…and look smarter than your friends while doing so. Starting with-

Do you have what it takes to see through the lies?

It had to happen sooner or later. A combination of painstaking guesswork and betrayal mechanics, Deception is the greatest bent-cop simulator on the market. Setting investigators against a hidden murderer on the force, players are fed clues in this quick playing games while the secret killer tries to muddy the water. With the cops winning if they correctly earmark a piece of key evidence and the method, play becomes fraught as the team turns on itself – with the complexity ramping up through different roles as the player-count mounts. Slick, simple, and fun to play; Deception is the Infernal Affairs simulator you never knew you wanted.

Can you cover your tracks?

Moving from deception to evasion, Whitechapel is a game of stopping a cold-blooded monster from getting away with it. A tense game of hidden movement, one player takes on the role of Jack the Ripper as he tries to kill five victims before he gets caught. In practical terms, this involves the police doing their best to hound him down across the 199 square map, using deduction, insight, and frenzied searching to stop him in his tracks. Also available in the slimmed-down Whitehall Mystery – play oscillates from frustration to elation as Jack evades your grasp time and time again. But for those who want to slap the cuffs on the monster-

It’s hard to do better than the best of the best when it comes to deduction games. Built around the established ‘Consulting Detective’ format, the game asks players to work together to solve crimes through real-world detective work. Well…through reading the newspaper and playing a choose-your-own-adventure game that has you quizzing relevant suspects. Elegantly designed, this box includes a new interlinked series of four Jack the Ripper murders as you attempt to stop the killer in his tracks. Tense, well researched, and truly chilling – this is a perfect pick for groups who want a challenge while sipping their coffee.

Can you hide your true nature?

While there may be slicker options available, there is no substitute for going back to basics. And that means revisiting the delightful town of Miller’s hollow. An implementation of ‘mafia’, this 2001 classic asks players to ferret out the werewolf in your group. With the creature chosen at random at the start of the game, players are assigned secret roles to help sniff out (or cover the tracks of) the killer Werewolf. A party stalwart for a reason, this version scales to 18, is simple to set up, and keeps you guessing throughout the night. While games like Blood on the Clocktower or Ultimate Werewolf Legacy may have revolutionized the formula – there’s something to be said for this plucky original that never, ever seems to die.

When it comes to running a murder mystery game, someone ends up left out. The moderator – a role common in many games – has to keep things running, manage players, and make sure the session resolves on time. Of course…some games change all that. Mysterium sets the moderator as the ghost of the murdered individual, sending players clues in the guise of dreams. This puts a passive role right in the centre of the action, keeping all members of the group entertained as you struggle to unlock the murder mystery before the time runs out. Throw in some gorgeous art design, streamlined play, and the best post-game chat you’ll have for months – Mysterium is a glorious addition to every collection.

Punch your way through mystical and ancient threats

Combining storytelling with phenomenal writing, Billy Kerr is as riveting as it is hard to experience. Set in the room of a terminally ill patient, players take on the role of nurses coaxing the life story out of the eponymous Billy. Players have to fulfil their duty of care, make your patient comfortable, and coax stories out of him – aiming to help him tackle the three regrets that hang over his head. While dealing with heavy themes, the game is celebration of a life lived and highlights the beauty in our otherwise conventional lives.

An adaption of the iconic book

A fantastic adaptation of Umberto Eco’s phenomenal book (and exceptional film) players take on the role of everyone’s favourite crime-solvers…cloistered monks! A game of compelling deduction, limited actions to make sure that you remain above suspicion. Each game begins with a player being given a colour for their monk and have it remain secret. The game involves finding a balance between your level of suspicion, the clue tracker, and expertly using your time to unspool the mystery. Involved and exacting, NotR is a glorious game that’s infinitely playable and tense to the end.

Crime in the modern age

Was there every any doubt. Taking the industry by storm, the Detective series combines modern digital tools and apps to replicate the feeling of unspooling a murder mystery. Combining cards, consultation, interviews and more – players carry out all the key tasks of detectives to ferret out the criminals in each case; with each solution feeding into a bigger mystery with end-game revelations. The recent season one pack acts as a perfect, low-cost introduction for players, offering hours of expertly composed clues and conundrums for your team to unravel. Playable in groups or by yourself, the future of crime is here and ready to be taken down.

What are your favorite whodunnit board games? Tell us in the comments!