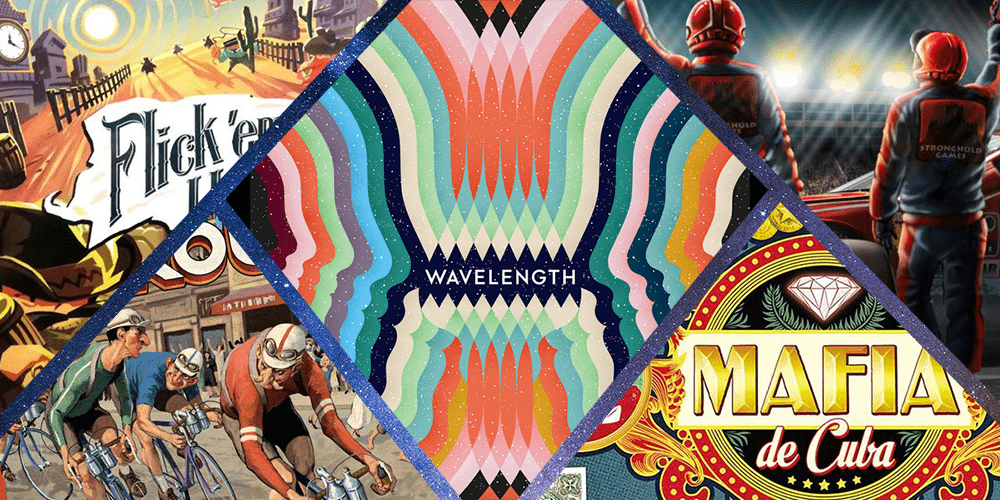 Let’s be honest. When it comes to your fondest gaming memories, it’s often a case of ‘the more the merrier’. Whether it’s cramming round the table to play Dixit, squeezing in a crowd to play 7 Wonders, maxing out your options to play Skull.

But including everyone can be a bit of a challenge.

Differences in experience, confidence, and age can make an inclusive hobby exclusionary. Flow is easily disrupted by rules lawyering. And keeping up with strategic and tactical decisions can sap a group’s energy in record time.

So, here are eight of our favourite family-friendly games that offer amazing play without worrying about complexity or a difficult teach.

When it comes to learning something new game, context can be a massive help. Even the most difficult game can be understood with speed if your end-goal is based on a real-world example. And even the simplest abstract can be tough to teach without reference. And there are few examples better at representing this than the wonderful Pit Crew. Your group is split into teams as you support the drivers in car race. Taking place at breakneck speed, competitors are encouraged to find a balance between brinksmanship, and strategic, careful play. Marrying madcap antics (your first couple of runs) with hard won strategy( everything that comes after), Pit Crew is a wonderful for groups from all backgrounds

Are you on the same wavelength?

There’s an old saying in board games- the game is one that doesn’t exist at all. A game where interaction is so streamlined and elegant, that no parts or pieces are necessary to support play. And when it comes to a game that markets itself on “ infinite possibilities”, you’re on to something special. A competitive guessing game, players are given a binary choice to give an opinion on. Happy or sad. Hot or cold. Tough or easy. You then use the game’s massive physical dial to set where you ‘fall’ on the wavelength. Teams are then forced to turn their own dials to represent where they think the gasser falls, with the closest getting the points. Designed to facilitate and encourage discussion, Wavelength is the perfect ice breaker for groups of all sizes.

How fast can you pedal?

While we may be pushing the boundaries a little with this one, the degree of extra legwork is more than worth it. Combining a racing game with careful hand management, Flamme Rouge puts players into cycling teams competing in a fierce race to the finish. Armed with a finite hand of cards, players are required to manage their resources as they jostle and squeak their bikes round the track as it dominates your gaming table. But, if you’re looking for party antics, The Peloton Expansion ups the player count to an insane 12 – turning it into your own personal horse race complete with drinks and optional betting…

Be the fastest flick in the West!

While we’re massive fans of the Dead of winter reskin, there’s something to be said for the beautiful simplicity of the ‘original’ Flick ‘em Up. Putting you in the wooden shoes of meeple cowboys duelling at high noon, players take to the streets as you take part in a shootout that is half Quick and the Dead and half Looney Tunes. Played with physical dexterity, anyone that can flick dirt off a table can play. And, before long, wild shots come under control, tactics come into play, and a killer longshot from Grandad sends up a cheer of joy.

Sometimes all you want is an award. A trivia game with the mildest of twists, Trophies’ play is quick and simple. Players are given a topic and encouraged to list words beginning with the letter presented to them. For example, listing board games that begin with the letter B. Dull, right? Except for what else comes in the box. A tiny, gold trophy that’s awarded to the winner – and a ‘runner up’ card for the second place. And, as the rules explicitly state, the winner of each holds onto them until the next session. This creates a wonderful sense of competition and a framework that supports your play. Before long, your group will be scrambling over each other to collect their prize and head the leader board. Not bad for a tiny box, eh?

It’s fun to be employed!

Imagine Cards against Humanity, but actually funny. Framed as a job interview, a copy of Funemployed comes with a list of job titles: priest, lion tamer, printer repair man, etc. Accompanying them are a list of skills that make you eligible for the job in question: nunchaku, scuba gear, a sense of entitlement, and more. The game comes from players being encouraged to justify why they deserve a job using the limited cards in their hands. Before long, you’re dealing with long winded justifications, panicked excuses, and super-confident bragging about why your pair of fishnet stockings makes you the perfect pick for the next Facebook CEO. With zero learning required and fluid play, Funemployed is the perfect pick for any group.

Will you be loyal or will you steal?

Everyone loves a bit of crime, right? Played as one-versus-many challenge, a single player is designated godfather, passing the game’s box around under the table and checking it again once it returns. While it started full of diamonds , it’s now empty … and the Don has to figure out who just picked his pocket. The game quickly descends into arguments and bickering as he tries to find the rat and the thief tries to escape scot free, or a hidden CIA agent tries to bring the organisation down from the inside.

Are you the hunter o r the hunted?

Searching for maximum fun, minimum rules, an optimal embarrassment? Pal, you found it. Affectively a weaponized children’s game, players take on the role of forest animals trying to avoid a hunter…and score as many points as they can while using hand-gestures to match the animals appearing on cards in front of them while the designated “reader” tells a story. There’s a neat, strategic game here, but you’ll all be laughing too hard to really play it. Brilliant fun, and offering surprising depth, it’s the perfect pick for any group.

What are your favorite family-friendly party board games? Tell us in the comments!

Nice collection.. i need to test a few games at upcoming christmas Holidays ????

These games sound like fun. I love games that are fast to pick up that everyone can enjoy

These are some good looking recommendations and it’s the first time I hear for most of those. We’ll have to start trying them.

have to find out more about those games