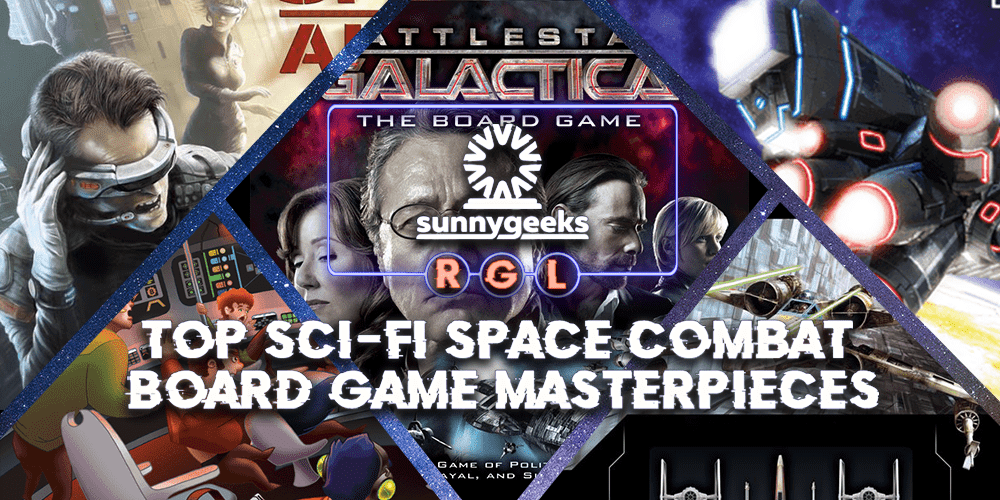 But it can be if you want it to.

Board gaming’s love of high-tech sci-fi action makes it the perfect way to enjoy high octane space combat. From solar dogfighting, slow-moving naval battles, to everything in between – there’s no better option for budding Starfleet officers…or would-be Borg.

So, here are eight of our favourite games that absolutely nail the art of future space battles.

We’ve all seen the scene. Enemies bearing down. Sparks flying around the Captain’s chair. Our brave leader holding on till the last minute to fire. Less seen is two people screaming at each other and frenziedly rolling dice in real-time. Which is what this game provides in spades. Published by Stronghold in 2013 – SCDD is pulse pounding masterpieces that ask you to take the fight to your opponent single handed. Players used their weapons and shields to poke and jab at their enemy while resisting the onslaught of their opponent. Playing quickly and with maximum carnage, this is the perfect Trek Lite experience for players of all backgrounds.

Flip your ships and protect the world!

Does “the bad guys came from space” count? Because, if so, Flip Ships offers something unique. Marrying dexterity with tabletop space invaders, players are asked to (you guessed it) flip your battleship to hit your opponents. Easier said than done, the weight of your tokens and the spacing of the aliens in question means that the learning curve is steep. But, sister, when you figure it out the gameplay is phenomenal. Perfect for parties, big groups, or cheering brutal two player sessions – the game must be played to be believed. And with it available at a budget price at most outlets, there’s no excuse not to give it a spin.

The galactic epic on your table!

A long standing favorite in the BGG rankings, 2008’s Battlestar Galactica takes everything great about the iconic series and squeezes it onto your tabletop. Offering tough decisions and deception, the game tracks humanity as they struggle to return to the safety of earth…despite having a traitor in their midst. 2009’s Pegasus expansion adds the iconic ship into the mix, making space combat a viable strategy rather than a last-ditch battle as you jump from planet to planet. This gives Galactica the oomph it needs to take out the beautifully cast base stars that also come in the box.

Dogfights in a galaxy far, far away!

Now we’re talking. Re-released in 2018, this tiny delight lets you re-enact the dogfights of your dreams. Played as a miniatures battle on your desktops, players set their turns and dials on the map and aim to blast each other to space dust – with each model able to be customized with pilots, equipment, and other gear. While picking up models may be pricey and you’ll need a proper gaming table to field play, it won’t be long before you’ve got a fleet that would make the emperor himself proud. Or field a team that would be the pride of the rebel alliance. Combining bluffing, flight, and gorgeous models, there’s little that could better it. And, if there was…surely it wouldn’t be further up the list?

Space is your sandbox!

Another stone-cold masterpiece that offers amazing play without sacrificing complexity. Xia is a 4x masterpiece that sees you gradually exploring a randomized universe and trying to pass your vessel into legend. Players are given a high degree of customization and agency as they build their shops and drift through space – uncovering loot and opportunity. OR…you can go the other way and become dreadful pirates, terrorizing the other players at the table. With satisfying play and a wealth of options, Xia must be played to be believed.

Can you solve the puzzle of the galaxy’s domination?

For those who may find Xia a touch inaccessible, Funforge is here to help. Offering involved space combat with a stunning twist, Quantum lets your sturdy (and gorgeous) D6’s act as your ships on the board. This makes a solitary ‘1’ a hulking battleship and a ‘6’ act as a nimble scout, with each number in-between bringing things to the table. Throw in unique ship skills and the board quickly becomes a hot mess of space battles, resource wars, and more to allow players to carve up their own story. Or just slice through the opposition.

Time is against you!

What’s more fun than commanding a crew in a slick star-ship? That’s right – taking a rust bucket into space that’s held together by prayer and duct tape. Released in 2008 to great acclaim, Space Alert is a phenomenally generous space simulator that sees you face down a different, often ludicrous challenge every time you open the box. Asteroids, enemy ships, space crabs, and more, make their presence known and push your team to its limits as they struggle to respond. Built around pre-programming actions and dealing with tight time deadlines – Vlaada Chvátil opus provides a range of difficulty settings, immense randomization, and a stonking experience for all would-be members of the federation. Though, when it comes to true space combat, there’s no better option than-

Where do we begin? Released in 2015 – Armada is literally the next step up from the X Wing miniatures game. Built around slow-moving and deadly capital ships, play is considered and deadly. Letting you take on the role of an admiral, you use your ships and squadrons of fighters to plot your movement, ‘stack’ commands that will execute at just the right time, and outthink your opponents as you slam the final hit home that destroys your opponents. With regular expansions released and a wealth of customization options, this is the definitive space combat game. While the asking price may be high…the rewards are significant indeed.

What board games scratch the all-out space combat itch for you? Tell us in the comments!

I prefer Star Wars Rebellion over X-Wing or Armada, but I understand that those are more combat focused than Rebellion 🙂