Top Tiny Classic Board Games To Keep On Your Bookshelf 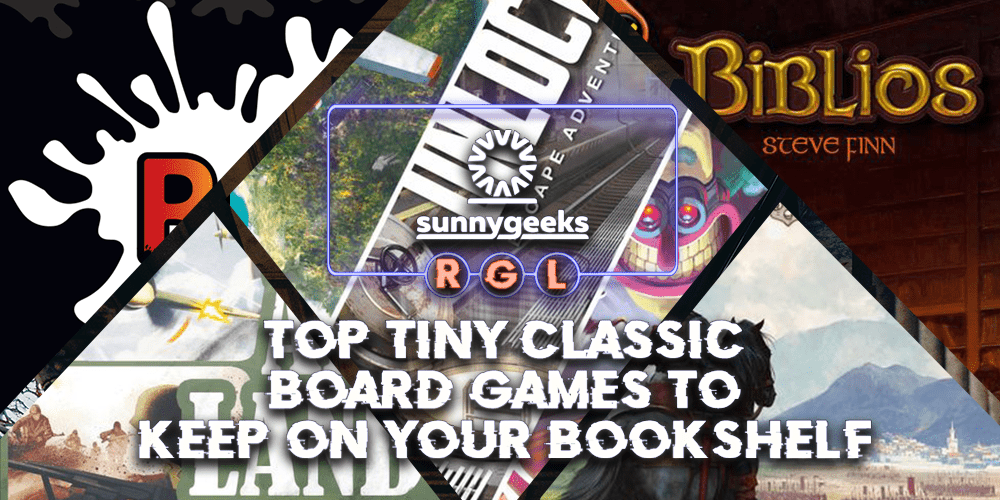 Sometimes space comes at a premium. Whether you’re struggling to find room for books, art, knick-knacks, or just looking for a little extra space – smaller proves to be better.

Thankfully, boardgaming is happy to oblige.

Here are eight of our favourite games that combine small shelf size with amazing playability.

Charming Geishas with gifts may not sound like the most pulse-pounding way to spend an evening. But, trust us, this classic from Koto Nakayama not only balances play on a knife-edge but leaves a lot of room on your shelf. A taut game of drafting and hand management, players go head-to-head in an attempt to win the favour of Geishas by offering them their favoured gift. In real terms, this translates into a minimalistic beauty of a game that sees players agonising over tough decisions and making picks that don’t favour your opponent. Beautifully designed, highly replayable, and gorgeous to look at. It’s a must for any collector.

Can you spot the con artist?

Moving from tense tactics to a party masterpiece, Fake Artist is part of Oink Games’ small box collection (that also happens to include the wonderful Deep Sea Adventure) and is as simple as its physical footprint is tiny. The game sees a Question Master hand out a subject of their choice to the game’s artists. The platers are then allowed to draw one continuous line on the page, going round the table twice before the group is forced to identify the ‘fake’, the player whose subject was left blank. Combining bluffing and the tiniest piece of artistic skill, fake artist is perfect for people whose collection is bloated but their appetite for banter undiminished.

Familiar to anyone who has played The Witcher’s ‘Gwent’, this masterpiece captures all the fun of a ‘dudes on a map’ game with the added bonus of bluffing and trickery. Players fight over a map to take over regions in renaissance Italy. They do so by using the cards in their hand to secure a majority in each area. Some options add to your points total while others add special effects that can be used to deceive, punish, or outwit anyone else who is vying for control. While the latest big-box version may be tough to squeeze in, picking up the Fantasy Flight classic in its iconic small box is a great shout for any group.

Mindfulness meets multiplayer fun, the Railroad series is a perfect choice for players that like to doodle as well as while away their lazy Sunday evenings. Players use the results of dice to build their routes and lines, attempting to reach the edge of the map and score points. With minimal player interaction, this can become a sedate playing experience or a mad-dash attempt at optimising…and drawing cute, wee choo-choo trains. And with two sets published and an expansion for each, it’s a series that definitely has legs as well as wheels.

Can you Unlock the exit?

A co-operative delight, Unlock’s app assisted play asks you and your friends (or just you if you like) to solve puzzles, riddles, and mysteries to escape the location you’re trapped in. Available in a range of formats with a wealth of aesthetic options and difficultly levels, Unlock is a wonderful call for groups of all ages. However, we would be amiss if we didn’t mention the wonderful Exit: The Game series. While this may be our in-house pick for the best ‘escape room in a box’ experience, Unlock’s randomisation means that it can stay on your shelf as long as you like. And Exit’s ‘One and Done’ nature means that, once you’ve had a wonderful time decoding clues and solved your puzzles – in the bin it goes.

Battle on all fronts

A recent addition to the pantheon of small-but-brilliant games, AL&S not only covers a war on three fronts but is playable in 30 minutes or less. A game of judicious areas control, the game sees two players going head-to-head as the Allied and Axis Powers as you try to force your opponent to withdraw…when you want them to. Involving careful resource management, the game sees players face-up or down to trigger their special ability or being deployed to utilise their strength – with the strongest card taking the field. After a turn you’ll discover why this tiny box holds so much tactical and strategic potential alongside ease-of-play. Earning it a spot on our shelves for a lazy lockdown lunchbreak or a wonderful time-filler after a long, long day.

It’s all in the sacred texts

We love monks, so sue us. Effectively combining two games into one, Biblios asks players to oversee a monk auction – with players acquiring the supplies needed to complete their duties and obtain the greatest collection of artefacts to earn the favour of the almighty…which, strangely enough, involves the accumulation of victory points. Perfectly balanced from two to four, the game asks players to bluff and bid their way to success using the game’s cutthroat auction mechanic – where the value of certain card ‘sets’ can be manipulated – letting your friend’s collection of scribes plummet and force them to wish they had diversified when they could. A wonderful filler or the perfect choice to take up an evening, slide copy of this tiny wonder on your shelf today.

Combining simplicity, playability, strategy, and second-tiniest box size on this list – Red7 is a force to truly be reckoned with. Asking players to be winning or be out, Red7’s draw a card, play a card mechanics unlock a world of strategic decisions. Each card played changes the ‘winning’ rules for a round, eliminating players that can’t keep up or don’t have the clout to keep playing. Offering ‘fun uno’ the game’s basic instructions add an additional level of complexity on the advanced mode where the cards you play become your points, limiting options for the rest of the table, and letting players turn-in inferior hands to screw you over. Cheap, fun, and highly playable – Red7 deserves a (tiny) space in every player’s collection today.

What are your favorite pocket board games? Tell us in the comments!