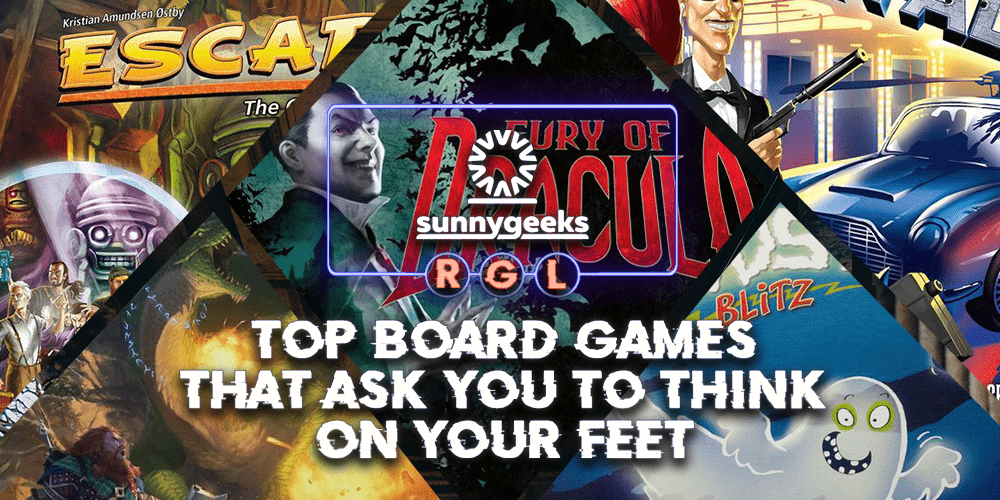 Sometimes you want to sit down with a great game and mull over your turns with friends and family.

And sometimes you want to end up sweating through your cardigan as your loved ones catch you in a lie and bring the hammer down!

Modern board games are fantastic at pushing us (safely) out of our comfort zone and forcing us to think fast. Here are eight of our favorite games that require quick wits, nerves of steel, and the ability to perform under – admittedly mild to moderate – pressure.

Lurk in the shadows!

A one-versus-many classic, Fury puts one of you into the tailored shoes of the fearsome count as he spreads his influence across Europe and eludes being staked. As the vampire player remains privy to all the table talk, they quickly run rings around their human opponents. But it’s best not to get overconfident because when (never if) they find you – you’re in a world of hurt. This requires the ability to shift your strategy as your opponents relentlessly track you down and try to deliver the smackdown you inarguably deserve. Run or hide? Fight or flee? The choice is yours!

It’s always fun in the office!

A stone-cold classic that asks: “What’s more relaxing than a job interview?” Played in a similar style to Cards Against Humanity, players are given a hand stuffed with skills, attributes, and items – all of which are more useless than the next. Each hand sees players compete to find out who’s perfect for the job in question (covering everything from astronauts to circus clows) and asks players to throw down cards from their hands to see who’s fit for the role. And believe us when we say, watching someone struggle to explain why having nunchakus, a watermelon with a face on it, and a sense of superiority would make them a perfect priest is a dream come true.

Can you be quick enough to help the house ghost?

Sometimes the simplest games are the best. Designed for children but accessible to anyone, Blitz places a number of beautifully crafted wooden items in front of players and turns a card from a deck face up. Players then rush to grab the item from your table that is either coloured correctly on the card or nab the item that isn’t shown among the pictures. Simple in theory, impossible in execution; the game rewards the player who can think fastest and make the right call in the heat of the moment. Joyous for kids, a stress-fest for anyone over the age of 25

Don’t forget to grab your hat!

It’s all fun and games until the dice get locked. An exceptional design from Queen Games, Escape asks you and your friends to charge into a disintegrating temple and escape with your life. A simple roll-to-move game on the surface, Temple quickly piles on the variables as you play. Rooms are added at a rapid pace, crystals need to be collected, and players can quickly find themselves trapped by ‘cursed’ dice. This makes it essential to react with speed and decisiveness – asking you to make the right call on a second-by-second basis. Horrendous for some but, for those looking for a challenge, pure heaven.

There is a traitor among us!

A gorgeous hidden-roles delight, Avalon recreates the experience of having a traitor in your midst in an Arthurian setting. Each turn players will be forced to identify who they can trust and who they suspect – resulting in one of the most experiences in board gaming. And when you reach higher play counts and two or more of you are sneaky petes, waiting your time to strike and spoil one of the game’s essential votes.

One of the most exceptional dudes on a map games on the marketplace, Inis rewards clever plays, flexible strategy, and – perhaps most of all – a willingness to improvise. The game’s ‘rule of six’ victory conditions mean an emphasis on tactics as opportunities open, close, or offer inroads with a little luck. As the board-state shifts and turns, players need to think fast as threats present themselves and players find themselves a deed token or Epic Tale card away from an unassailable lead. Or if someone is pulling ahead, a quick move can shatter their lead and position yourself to swoop in and claim victory. Offering a litany of interesting decisions, there are few games that do a better job of demanding – and rewarding – vigilance.

Create your own path to adventure!

Ever find that working together makes decision-making worse somehow? A now long-standing release from the team at Paizo, the Pathfinder adventure card game condenses a hack-and-slash roleplaying session into one setting as your party level’s up and takes on challenge after challenge. The reliance on cards allows for the creation of unique scenarios that require exceptional co-operation, but also the ability to react to the dragon that has popped out of the deck and now threatens to murder all of you. But when you cobble together the strategy, play, or tactic that saves the day…there’s nothing like it. playability and equal levels of stress – this is the perfect pick for groups looking to push the boundaries of what the hobby can offer…all within 30 minutes.

Put on your poker face!

AKA “Just how much of a bull%$£% artist are you?” A glorious design first published by cryptozoic in 2014, Spyfall provides players with a role, a location, and prompts players to ask each other questions. “Are you getting paid enough”, “Do you think it’s safe here?”, “What do you think is going to happen next”. All these are contextualised by who the answerer is and where they know they are. Except…one of you is a spy. And that means having no awareness of any vital data, forcing them to tap dance and act like they belong. If the group can unanimously agree on the spy and they’re right, they’ve won. But if the spy can figure out where they are, they take the win. Combining fast talking, quick thinking, and rules that can be taught in seconds.

What board games have you making snap decisions? Tell us in the comments!

These seem awesome! When my group starts to get back together for game night these will definitely be one to look at.

Spyfall and Avalon for me…love the thrill of pressure games.

amazing choices 🙂 I wish you all a Happy New Year 🙂

I do like spyfall and Avalon. Other great games that could join this list for me are Galaxy trucker and ricochet robots.

I haven’t played any of them yet but I knew some of them. I want to play them more now.

My boyfriend would love this game

Spyfall looks interesting, maybe fun for playing with my family.

I’ve been interested in Fury of Dracula for quite a while now.

I find anything with a timer aspect makes me make fast decisions.

i am here for the competition to be honest… ﻿ ???? ﻿
But i also love and wanna buy the new table!

Even though it’s generally highly regarded, I really don’t like Inis very much.

Seems to be a “love it or hate it” type of game. That’s how it went with my group, I was the only one that liked it a lot! It might “promise” something different than it actually is I guess.

I have Fury of Dracula, but haven’t played it too often.

Been eyeballing Fury of Dracula myself a bit. May need to grab it

I agree, it’s kinda difficult to bring to the table.

Ik think Captain Sonar should be on this list.

I hanven’t played any of these. I should check some out.

Nice list! Escape is my favorite by far. Love the tense moments after the gongs. I also enjoy Pathfinder.

Oh my, Escape is SO tense! New players always throw dice off the table (which I first thought how can it be possible at all?!). There are a few very good expansions too.

Pathfinder as a campaign is extremely enjoyable, I have to say.

Not played a single one but I’ll try Inis as there will be a fresh German version soon.

All great choices! I personally like Inis, it’s quite beautiful too, but there is a lot of controversy about it.

Pathfinder looks fun, I’ll have to check it out.

It’s a ton of fun as a campaign! I have gone through it with a 3-player party and was one of the best gaming experiences I had ﻿ ???? ﻿

Can be quite fun indeed!