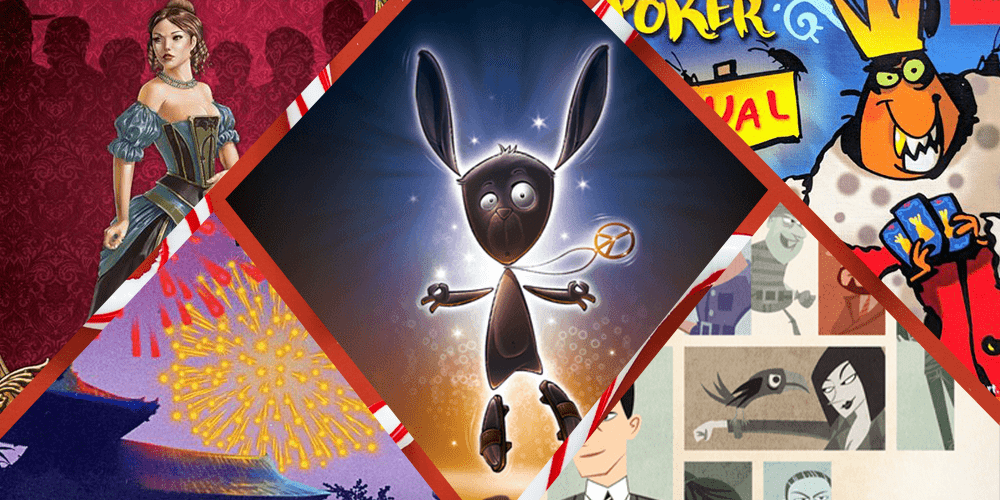 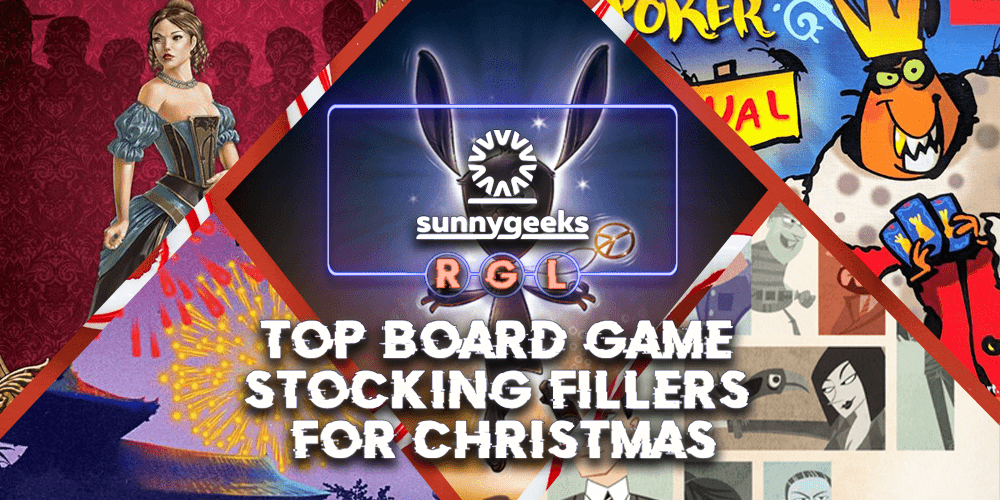 Board games are a perfect Christmas activity, something that the whole family can join in on. But you don’t want to get stuck playing Clue with two suspects missing or a Trivial Pursuit set where the music questions are about Duran Duran. This Christmas, treat friends and family to some low-cost, high entertainment games!

Nothing beats sushi and board games!

Sushi Go Party! is a card game in which you assemble a delicious meal of smiling, cartoonish sushi. The illustrations are charming, the game is simple and accessible, but it provides enough options to entertain dedicated games as well as casual players.

Will you try to collect sashimi or take the wasabi to improve another card later? Like eating in a cheap sushi restaurant, every move is a gamble on what the future holds.

It’s a jungle out there!

If you’re buying for kids, or for someone who values reflexes over strategy, then Jungle Speed is a fine choice.
This is basically action snap. One by one, players reveal the top cards of their decks. If two cards match, then the first player to grab the totem in the middle of the table gets rid of some cards. Whoever empties their hand first wins. But beware, the cards are deceptive.

It’s easy to think you see a match when there isn’t one, bringing a penalty down on your head.
Jungle Speed is a fast, chaotic game guaranteed to liven up an evening.

Light up the festival!

If the fierce competition and frantic pace of Jungle Speed fill you with dread, then Hanabi could be the game for you.

It’s a gently paced cooperative game in which players try to play cards in the correct order to set off a fireworks display. The catch is, you can’t see your own cards, and other players can only give you limited clues.

Simple in theory but thoughtful and challenging in practice, Hanabi has the advantage that nobody wins or loses – you all try to get the best score you can together. Far safer for a competitive household than getting the old Monopoly board out.

This game is all the buzz!

If you only have a couple of players then Hive offers an interesting challenge, and Hive Pocket offers a stocking-sized option.

Hive is a two-player game akin to Go or chess, in which players maneuver for position using hexagonal tiles depicting a variety of bugs. Each one moves in its own distinct way and victory is achieved by swarming your opponent’s queen bee. It’s a game that strategic thinkers can lose themselves in.

TIP: Hive Carbon is available, which includes the two expansions, plus we find the black and white tiles really classy!

We hope you can communicate telepathically!

While we don’t know if this is how you wanna spend your holiday nights, the Mind is a truly unique game.

2 to 4 players are dealt hands of cards numbered 1 to 100, which they must keep secret at all times. They take turns forming a central pile in ascending order reading each other’s…..mind (or body language) with hilarious results.

A very popular game. Quick, cheap, fun and clever. Get it, and play with family and friends.

It’s a secret to everybody…

If you don’t want to play one-on-one, then how about a team game?

In Codenames / Codenames Pictures, two teams of spies try to identify their own agents in a grid of codenamed cards. One member of each team uses careful wordplay to point the others in the right direction while avoiding enemy operatives and the deadly assassin. It’s another accessible game for all the family, powered by an entertaining combination of word games and guesswork.

Original Codenames is rightly well-loved, and if you want to get kids playing then you can also find Disney/Marvel/The Simpsons and Harry Potter spin-offs.

Put on your poker face!

Perhaps instead of helping others, you’d like an excuse to bluff and lie. In that case, Cockroach Poker could be the game for you.

Each player is dealt a hand of cards showing a variety of small, unpleasant creatures, such as cockroaches, rats, and scorpions. On your turn, you pass a card face down to another player and announce what it is – honestly or otherwise. They have to decide whether to pass the card on or call your bluff. Whoever ends up with four matching cards in front of them is the loser.

Cockroach Poker is simple, brutal, and endlessly entertaining. Just make sure you bring your poker face.

If you are familiar with Paperback, you already know that Tim Fowers designs wonderfully elegant games that are simple to learn but deep in play. Burgle Bros. is a cooperative heist game for one to four players, so you can play it solo if you are up early (or late) and everyone else is asleep.

This game is fairly challenging for a cooperative game, but it is also extremely replayable. There are many scenarios provided with completely different board configurations, and you can even design your own.

Nothing beats sushi and board games!

Yet another game for (innocent) liars and cheats, Coup has a deck of only fifteen cards representing the figures of power at court. Use your influence with those people – or bluff about it – to accumulate the wealth you need to launch a coup.

But beware, if you’re caught out in a lie then the tables could be turned, leaving you on the losing side.

A story determined by destiny (dice)!

If you’re already comfortable with improvised stories, or if you want to get better at them, Rory’s Story Cubes are a great tool for stretching your storytelling muscles.

Is it a game? Is it an activity?

Play is very simple: roll the dice and create a tale that ties the symbols all together. Story Cubes are a great activity for holidays, and there are many different expansions that you can mix and match to produce some very wild ideas. Also, because there’s nothing to read and the only limiting factor is your imagination, this is an ideal game to play with children.

Light up the festival!

Delivering love notes to a princess might sound like a twee game concept, but Love Letter has real substance.

Each turn, a player chooses which of their two cards to play. Their aim is to knock others out by guessing their cards or to have the highest value card at the end of the round. It’s a fast, fun guessing game whose multiple short rounds let you play for as long or short a spell as your like. Oh, and there are lots of versions available!

A band of treasure hunters is searching for wealth on the ocean floor.

The catch is that you have a single supply of oxygen between you and that supply is running out. Will you push your luck trying to get the big treasure, or take a few small pieces and run, hoping that no-one else will get back to out-do you? The longer the game goes on, the less oxygen there is and the closer the big treasure comes, increasing the risk but also the temptation to push on.

Are you up to the task of saving the world?

Unless your family is somewhat unusual, you are unlikely to be surrounded by roleplayers. But if you feel like having a great roleplaying experience, Our Last Best Hope is a great way to create an exciting story without any preparation or even a gamemaster.

It has an easy-to-use system for creating characters and scenarios, and very simple mechanics that keep the story moving and keep everyone involved. And it has just enough guidance towards a final goal to satisfy the boardgamers who may not enjoy the open-ended feel of roleplaying.

Our Last Best Hope is similar in some ways to Fiasco, except that it’s about working together to save the world instead of backstabbing everyone to save yourself.

It’s light, quick, and variable, while providing the system-building satisfaction that draws many players to worker placement. The initial run has sold out at the publisher, but if you can find a copy then it’s a great gift for a Eurogames fan looking for something quicker to fill those spare half hours.

-on-one, then how about a team game?

Giving the feeling of the Original Ticket to Ride, TTR New York, is a younger sibling acting as a gem of a filler and an amazing gateway game for all gaming groups of people.

The usual stuff apply here : Build trains from point to point in New York, connect famous landmarks for extra points on a smaller and cheaper bundle.

It’s actually way better than the card game released and it will provide countless of joyful moments for your party of family and friends.

Coup is an amazing game!

Some nice ideas there

Coup – otherwise known as “I AM THE DUKE”

I found this very helpful as I was looking for stocking stuffer ideas for the family this Christmas!

I’ve received a mint tin game for Christmas, looking forward to giving it a run ????

I have play the Jungle Speed and the Love Letter. I will definitely check out the rest.

I wish I came across this list before Christmas. Awesome ideas, the mind is a particularly fun one!

In Greece, we give gifts on New Year’s Eve too! Otherwise, here are some great small-game gifts for any occasion.

Last edited 9 months ago by Theo The Spymaster
0
Reply

Splendor has been a hit in our playgroup as well

This is a nice list for stocking stuffers! We have most of these games and it’s nice to see some of the lesser known ones on here like Hanabi and Mints Works. I actually haven’t bought Mint Works yet and have been thinking about stocking ideas, so I might just do this! ﻿????﻿

Hanabi won the Game of the Year of 2013! Such an exceptional design, it’s a must!

Glad you liked it ﻿ ???? ﻿ Hope you found some interesting new games to check out here.