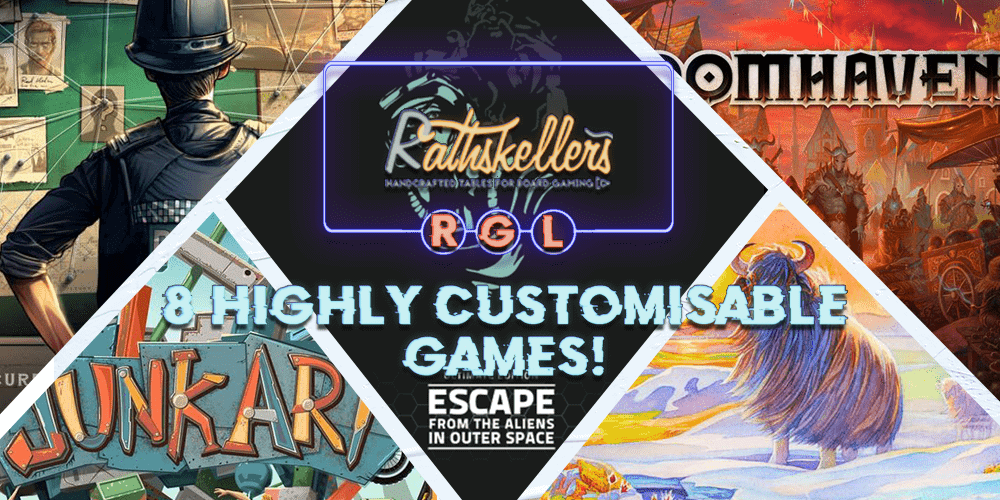 Play the Way You Want to with 8 Highly Customisable Games

Sometimes, it’s just more fun to push the limits of what a game lets you do. Whether it’s customising components, trying new strategies, or playing the way you want you – some classics let you get away with more than most.

So here are eight games for envelope pushers and control-freaks everywhere, starting with-

What exactly is a game that puts the entire course of human evolution at your fingertips going to let you get away with? Turns out – a hell of a lot. First released in 2016, Evolution quickly became a useful tool for educators everywhere thanks to its ability to allow players to create and influence a dynamic ecosystem. Each game sees players struggle to find balance. Eat too much grass – everyone dies. Crush prey animals out of the food chain – everyone dies. Fail to evolve to meet a changing climate – you get the idea. Simple and highly repayable, Evolution is perfect for the curious and creative…and those that want to strap on a pair of claws and eat flightless bird after flightless bird after flightless bird-.

A classic for a reason, Dominion arguably kick-started the trend of engine building card games with its release in 2008. Putting you in the soft-leather boots of a regent, you are charged with gathering the most victory points through the building of your castle. This sees you installing moats, remodelling, and earning extra actions per turn. However, the true fun starts when you break out some of the game’s wealth of expansions. These let your group cherry pick the cards and sets that bolster the elements in the game you most enjoy. This can lead to direct conflict, ornate ploys for trades, or summon spirits to suit your friends. Seamless, highly customisable fun.

One of the few occupants in the ‘fairy-tale builder’ category, Once asks your group to use your hand of cards to weave a tale of dragons, sorcerers, and…skater penguins? Each copy of the game provides players with some extra blank cards to write up their own prompts and slip them in the deck. This lets you add a few surprise extras to your tale or add some old favourites from the Grimm pantheon. And if you’re keen to really customise your experience, picking up the Create-Your-Own Storytelling expansion lets you bring in a wealth of extra story and ending cards – letting you end up with a copy of the game that is truly unique.

The second game on our list that focuses on not being devoured, Escape strands you and your friends in space and asks you fight for survival. Split into teams of humans and oh-so hungry mutants, players sneak (or stalk) through the station to escape (or eat) their way to victory. While the deluxe version generously offers a range of wipe-clean maps, the designers have put their map creator up for free. This lets you design tense homebrew stages that challenge your players’ wits and bluffing ability. So, what are you in the mood for? Tight and fraught? Tricky and winding? A recreation of your own home? Everything is up for grabs.

Little more than a box full of plastic (or carved wood if you’re lucky) playing pieces, it should come as no surprise that Junk Art is customisable in the extreme. Play is built around completing a range specific dexterity tasks, ranging from crafting the tallest tower, collaborating on a build, or cobbling together a stack with the worst parts possible. As with ‘Once’, the game also comes with several blank cards and extra space in the rulebook for you to cook up your own homebrew favourite modes. With the help of a little extra alcohol, you can quickly end up with a range of custom modes that eclipse what the base set offers and pushes your group’s skills to the absolute limit.

While we could have filled this list up with legacy games, we decided to play fair and only add the leader of the pack. A stellar success since its launch in 2017, Gloomhaven offers D&D without the DM, allowing players to interact with a persistent campaign while chewing through exacting turn-based encounters. This lets you play the most expensive choose-you-own adventure ever, with no two groups enjoying the same adventure as you pass through the world’s branching narrative. Sealed components are brought out, characters grow, and stickers (yes, stickers!) are placed on the game map to commemorate victories and defeats. A creative triumph and perfect for players looking to optimise their play…or carve their way through the odd skeleton or two.

Ever finished a murder mystery and ended up disappointed with the ending? Thankfully, Lucky Duck games has you covered. Letting you play out an app-assisted murder mystery, the game’s base set of scenarios can be quickly expanded with the help of the team’s free scenario editor. This lets you create your own stories from the in-game tools already available and craft something spectacular for your next game night. The app also comes with a range of helpful videos that deliver top technical tips, pacing considerations, and guidance on how to assemble a crime that really puts your detectives through their paces.

Did you forget we’re living in the golden age of boardgames? No matter whether you love the meticulous play of Scythe, decimating opponents in KeyForge, or accumulating salt in Concordia – there will be a wealth of options to preserve your game or add tactility to your play. This can be as simple as adding plastic tokens to your game of Netrunner, custom inserts to Arkham Horror, or even use an App to cut back on your admin in Descent. Finding the right extras can help add spice to your D&D session and open up avenues and options that were never there before. And if that’s not enough for you, visiting the BoardGameGeek page for your beloved can quickly reveal rules tweaks, extra scenarios, alternate playstyles, tips, tricks, and more. These can quickly help add life to your favorite game, spice up your next session. Or just ensure that you have a fantastic time.

Do you have any other game to recommend?! Share it in the comments below 🙂