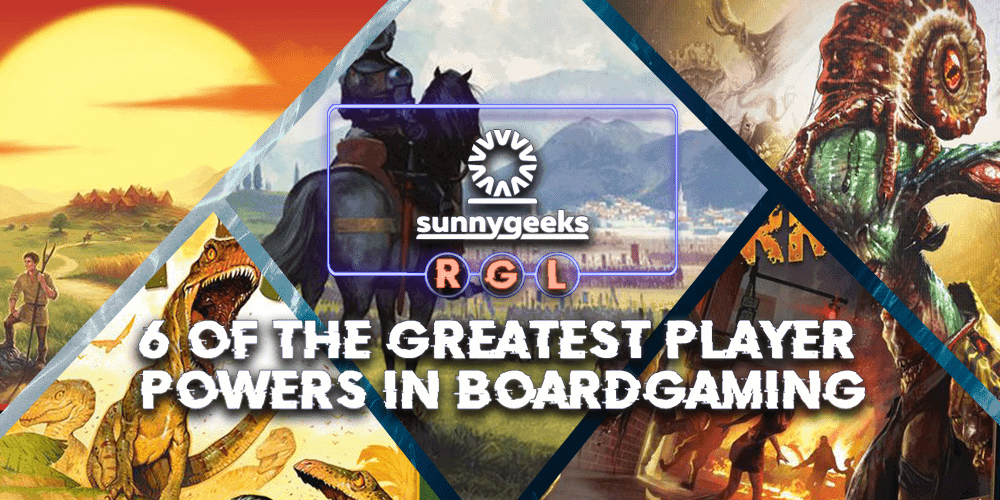 6 of the Greatest Player Powers in Boardgaming

When it comes to power fantasies, video games have nothing on what you can enjoy a few bits of plastic and a deck of cards. Whether you’re playing a simple card-based filler, an involved strategy classic, or taking part in an RPG campaign; it’s hard to beat having your friends next to you when you finally decide to flex your gaming muscles.

So, here are some of our favourite powers in the world of tabletop gaming, starting with-

Not exactly adrenaline-pumping is it? Arguably one of the most sedate but ubiquitous forces in boardgaming, Catan is an entry point for many and a guilty pleasure for even the most hardcore of players. While proving conflict-free by design, the game does have one feature that can actively ruin another friend’s day – the robber pawn. If the dice roll on your turn totals ‘7’, the active player gets to move the robber onto any hex on the board. Once placed, they manage to grab resources from adjacent players and stop individuals from gathering further material from the space. In the grand scheme of things, small potatoes. But contextually, this is like dropping a sledgehammer on your enemy. The robber lets you make things personal, disrupt your opponent’s plans and fish for critical resources when you need them most.

An absolute classic from the minds of our two favourite Bruno’s, Raptor is a two-player marvel that tasks you with capturing baby raptors for science or ripping the arms off the bastards messing with your kids. Perfectly balanced and tactically exceptional, play is governed by a hand of cards that give either side a range of options. For the humans, this can mean zooming around in a jeep, tranquing dinos, or calling in reinforcements. And for the Raptor, it’s acting as a terrifying force of nature that – thanks to the No. 2 card – can appear anywhere. Playing the card lets your dinosaur disappear from the board and reappear on any space, perfectly recreating the creature’s guile and omnipotence. Add in the fact that the human player has to show the next card they intend to play because they were being watched from the bushes, and you’ve got something truly special on your hands.

History lesson time! Did you know that the Condotierre were famous Italian mercenaries from the middle ages that specialised in indirect conflict? This mean trickery, deception, and political manoeuvring were the name of the game – something this exceptional game has in spades. A refined ‘dudes on a map’ game, players use their finite deck (army) to bid (threaten) their opponents by playing numerical cards, with the highest total taking the region. However, some of these cards have slippery little powers that activate upon being played. This can include a drummer who adds to the effectiveness of your hand, winter or spring that can cripple everyone’s effectiveness, or – our favourite – a scarecrow. This lets you swap one of your precious cards with a worthless decoy, letting you hold onto your most powerful units and tricking your opponents into overpaying for the territory. Game changing, thematic, and allowing us to embrace our inner Kevin McAllister – what’s not to love.

When it comes to picking a species from the world of Cosmic, we’re spoiled for choice. Built around clashing over planets, the game uses each race’s unique powers to break the rules of the game in some way. So, do we go for the terrifying Virus, the gargantuan Claw, the (unfortunate) Pacifist. For our money, the maddening Spiff were one of the first races that made us lean forward in our chairs and silently mouth “…what the ^%$!-“.  Their specific power lets them treat losing as winning, letting them ‘crash land’ a spaceship to act as a colony if they lose the encounter. This quickly inverts the game, forcing players to developed panicked strategies to box you out or get in on the action – quickly leading to screams of panicked delight as you take another colony after another astronomical failure.

An iconic series from the mind of Richard Borg, Memoir does an exceptional job at recreating the exacting push-and-pull of war. Tasking you with capturing victory points or achieving scenario-specific objectives, the game uses an innovative card system to dictate where your troops can move and/or attack. Displayed in their own holder, this leads to immense theatricality as you pore over the map before executing a well-planned surgical strike that wins you the game. Except…it’s easy to forget that some of the action cards in the draw pile are reactive as well. Throwing out the ‘Counter Attack’ card across your gaming table allows you to carry out a mirrored version of the same order your opponent just made. This lets you shred the opposition, squash them with tanks, and thoroughly ruin their evening altogether. It’s the simple joys really

Any horror fan knows the secret sauce that makes up a truly great zombie movie. Say it with us now: “it’s all about the people!” Replicating the fractious rivalries that develop at the end of the world, City asks players to survive the night with your fellow players in an infected city. Simple, except…there’s a bunch of people outside and they’re hungry. The only to placate them is, you guessed it, human flesh. Each turn players are asked to vote on the person that they want to hurl out into the street to placate the horde. This takes the form of players turning on each other in real life as they justify their survival, throw each other under the bus, and use player skills or cards to weasel their way out of trouble. And the way they’re selected? Count to three and point at the person you want to chuck into the street. Nothing comes close to the howls of laughter and cries of vengeance as they’re punted out to become a tasty aperitif.

Which power do you think is the best?! Tell us in the comments below 🙂

Kwisatz Haderach card in Dune Imperium – Essentially an extra turn and place an agent anywhere on the board. Much power.

That sounds strong! I will try the game soon, so I will keep that in mind, hehe.