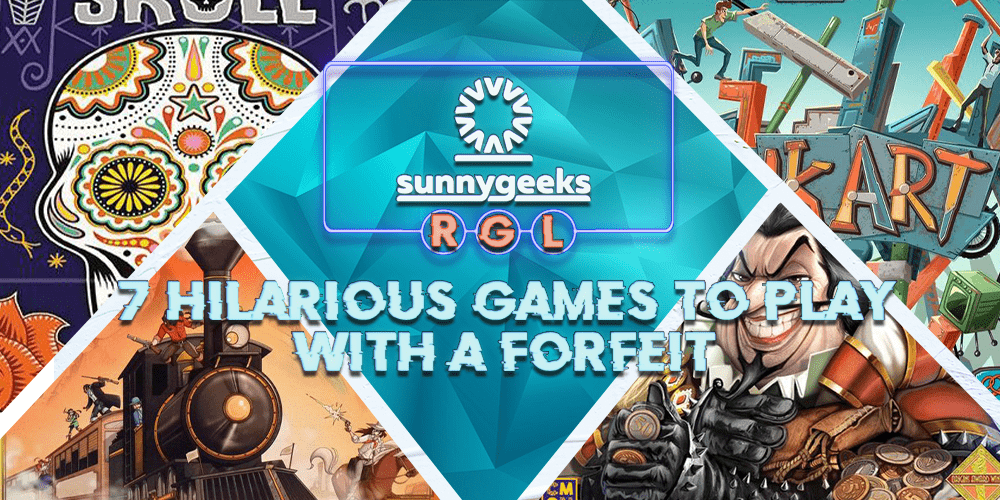 10 Essential Games to Play on Your Lunchbreak

Lunch is a fantastic time to get a quick game in while spooning soup into your face or tucking into a homemade sandwich. But with so many options currently available, it can be difficult to find the right one to comfortably cram in during your midday break.

So, here are ten of our favourite games to help make your mealtime more interesting. Starting with-

A quick-play masterpiece, HTMF places you as hungry penguins on a disintegrating ice flow. But hopping from glacier to glacier simultaneously picks up fish and removes the space you started on – allowing you to strategically dismantle the playing space and reduce the options available to your competitors. With rounds advancing at speed, a best of three can last little more than half an hour – making it perfect for groups that are limited in time and aren’t keen on complex rules. While it can be fiddly to play, adding a nerf dart with a sucker to your box can make the removal of pieces easier. And with quick setup and breakdown, this can be a great game to break out over lunch…or during an exceptionally dry skype conference.

A unique mix of mechanics

Stepping things up a notch, Targi is crunchy mix of worker placement, trading, and set collection – forcing you to engage your grey matter to secure an often razor thin victory. This is further complicated by variable powers, a modular setup, and a robber that acts as a game timer and potential source of victory for those canny enough to use it. While initially easy to grasp, the true heart of the game requires an understanding of all its systems, making the learning curve steep. If that’s you jam, the game has more than enough depth to make it a regular fixture of your lunchtime. And with sessions rarely clocking in more than half an hour, it’s the definition of a thinky no-brainer.

An undeniable lunchtime classic, Coup tasks players with eliminating the opposition and installing yourself as ruler. This is governed with simple play that involves each player being secretly dealt two cards face down that count as their influence (life points) and allow for unique actions. Except, you’re free to lie and take any action you want – forcing other players to bet on whether you’re bluffing or you’re packing the powers you claim to have. Being caught out of costs you one of your cards, with the move backfiring on your accuser if you’re telling the truth. And, it’s simply great. Playing quickly with an intuitive setup, the game is great for groups of six straight out of the box. So…if you ever wanted to call Kathryn from finance a liar to her face, here’s the perfect excuse to do it.

Who wants some sushi for lunch?

What goes together better than sushi and lunch? A party masterpiece, Sushi Go involves colourful set collection through a randomised selection of stylised sushi cards, asking players to draft with their neighbours to collect high-scoring sets. Designed to replicate the feeling of grabbing items off a conveyor, the game slips past quickly and involves second guessing, gambits, and a lot of bluffing. Add the fact that certain cards can act synergistically, and you can quickly rack up insane points combinations, allowing for surprisingly tactical play and carrying out the most passive-aggressive of blocks. Punchy and portable, Sushi Go truly belongs at any table.

You have to escape quick, luncthime is almost over!

Chances are your lunchtime is a rare chance to escape the stress and responsibility of your job. So…how does playing as a bunch of gnomes trapped in a disintegrating submarine sound? Built around a co-op wrapper, the game tasks players with sprinting around the vessel to put out fires, floods, and keep the engine running. However, as the game’s movement system is tied to the round timer – players can burn through actions at the price of creating even more problems to solve. Which means – if you have a looming meeting call – the game can hurtle to a final termination point as you struggle to pull a brinksmanship victory or be crushed into a tin-can or become cephalopod bait. A true, often overlooked, quick-play classic.

Who knew trading manuscripts was this fun?

Placing you in the role of avaricious monks looking to acquire valuable manuscripts, Biblios is the mother of all merciless auction games. Taking place across two halves, players are asked to ‘gift’ resources to others in the first round and auction the remainder in the second – with point totals being awarded for the player who accumulates the most of one set. But with some cards able to raise or low the points values of certain sets – the game quickly becomes a frenzied cash grab where your neighbour is more than happy to aggressively devalue your assets. Add in randomisation and a tight playing time, and Biblios is perfect for groups that love to buy and bicker – giving the heft and offering difficult decisions of a game five times its size.

Combining ‘take that’ play and genuine tactics is difficult, but Red7 pulls it off with aplomb. Asking players to take a card and play a card, the game’s rules are adjusted on the fly by the colour of the card played – ranging from crowning the highest card the winner, the player with the most even cards coming out on top, and much more. Offering simple and advanced play, the game quickly switches from a fun free-for-all to a deadly knife-fight that can see players eliminated for the slightest mistake. As playable as it is portable, a copy belongs in the webbing of every card fan’s laptop bag.

A minimalist marvel, DSA is the smallest game on this list yet always manages to produce the biggest cheers. Each turn sees players roll a dice and move further down the dive track, with riches waiting in the deep. But once a player decides to turn back, the oxygen begins to run out and players are forced to decide just how far they’re willing to push their luck to grasp some spoils or come away with nothing. The king of quick to play lunchtime games, this is perfect for those that don’t plan on spending too much though on their play. But for those that do-

A game that has it all

The mother of them all, Arboretum hides a ruthless game of set collection underneath a gorgeous wrapper. The game tasks players with collecting runs of cards, drawing up from a shared deck of trees or from other player’s discard piles. With an ultimate aim of creating a high scoring ’path’ of trees, the individual who collects those points is determined by the cards in your hand when you finish – letting Steve from accounts potentially pilfer your hard earned line of Jacarandas. With the perfect balance between bluffing, opportunistic tactics, and long term strategy – Arboretum is a masterpiece that’s great for all ages, confidence levels, and tastes. Playing equally well as a two-player gambit to its full quota of four, Arboretum deserves a place at every lunchtime.

What games do you play during your lunchbreak? Share it in the comments below 🙂