Some of our Favorite Board Game Mechanics 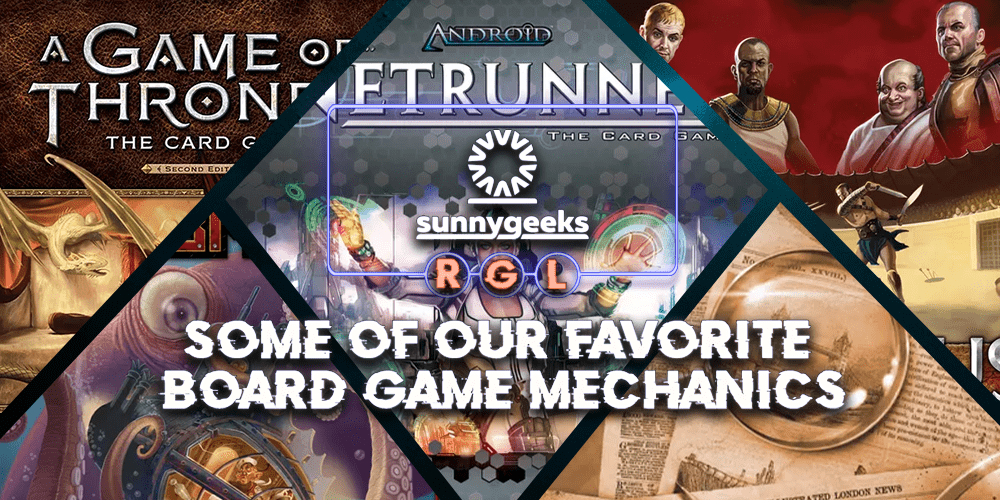 It’s the little things that make the biggest difference.

Whether it’s unique rules, edge-case situations, or game-defining elements – some games just bring something special to your table.

Here are eight of our favorite game elements that make a massive difference to your play.

Digging Your Own Grave

Ok, so…everything is broadly fine. Except we’re underwater and everything is on fire. A survival cult-classic, Fantasy Flight’s Red November puts you in control of a team of gnomes grappling with a submarine. This means battling disasters, picking up essential equipment, and even grappling with the giant octopus that holds your sub in its tentacles. And it’s basically all your fault. Every time players move, the game’s ‘timer’ rachets up – resulting in more death and disaster. This pushes a drive for efficiency as you try to complete your tasks as quickly as possible, but the more you do…the more you doom yourself. Add the fact that stealing an oxygen pack and escaping is a legitimate tactic – you’re going to be architects of your own destruction.

Described as an “easy party game” the truth is that Codenames is anything but. Splitting your group into two teams, players give clues that allow their teammates to guess the identities of spies in a list in front of them. Success means filling out the unique hidden grid before your opponent. Though the most observant among you can see a black square in the middle of your options. If any of your team guesses this square, you all instantly fail. This simple choice adds an element of fear and panic to the game as you avoid triggering or providing clues that activate the space. And as we all know,  when you’re told not to think about pink elephants-

If alliances are fun, betrayal is better. Capturing the meat-headed and unapologetically progressive TV series, GaleForce9 have clearly done their homework about what made the TV show so great. In Spartacus, players use an interlinked system to buy new gladiators and equipment, backstab their opponents, and battle it out for game-winning influence in the arena. The special sauce in this game? Anything goes. The game’s rules encourage players to metagame and broker deals, freely trade equipment, coin, and favours while playing. This perfectly replicates the spirit of the show as deals collapse, prize gladiators are poisoned, and players combine influence to play game-ending cards. Duplicitous fun for all the family.

Our favorite treacherous bastard said it best, never ever underestimate your opponent. Few games do this better than the long-lived card game from Fantasy Flight. Letting you create your own house and take it to battle, play involves clever tactics, the acquisition of influence, and plotting…so much plotting that they dedicate an entire card set to it. In addition to the game’s three types of challenge (power, military, intrigue), plot cards add caveats to each round of combat – representing the show’s famous twists of fate and the character’s ability to turn these to their advantage. Incredibly thematic, these add just enough complexity to punch the game to the next level…or want to punch your opponent when they play a handy “winter is coming” from the top of their deck.

What doesn’t kill me-

Why do we kill? Is it for vengeance? Power? The joy of destruction? Is it so that we can gain a valuable resource that levels up our favorite characters? Expertly designed to within an inch of its life, Games Workshops’ beloved miniatures combat series revolves around the acquisition of ‘Glory’, victory points that crown the game’s eventual winner. In a masterstroke, these also act as currency to purchase upgrades and equipment for your characters – letting you exhaust each point to add swords, spells, and other valuable bonuses to your characters. This completely changes the shape of each game and allows an unprecedented level of tactical control as you tailor your squad to the threat and opportunities at hand. And with a short playing time, it’s not long before you’re back to square one and ready to scrap again.

There’s nothing like a bit of drama, is there? A beloved modern classic released by Ravensburger in 2019, Jaws lets players act out the entire arc of the film – moving from snacking on helpless swimmers to taking the fight to the open waters in under an hour. This involves combining a game of tense hidden movement with a desperate game of turn-based combat where the hunter becomes the hunted. And somehow…it just works. Newbies are sucked in by the theme, veterans enjoy the elegant design, and hardcore players love the thrill of terrorising everyone as a giant fish. Add the fact the successes and failures of the first act feed directly into the second and you’ve got a stunning game with a rules booklet you can slide under your kitchen door.

If you know anything about gaming, hearing the words “Fantasy Flight” and “Card Game” can send a chill up your spine. It’s easy to image rules complexity, edge cases, and game-breaking powers. But the true strength of Android: Netrunner doesn’t come from it’s customisation and depth. It’s the commitment to one of the oldest games of all time. Each turn sees the hacker decide whether they want to hack their opponents servers to attack their agendas. This means bypassing security, threats, and traps – all with the goal of pilfering their opponent’s valuables. Except, sometimes – there’s just nothing there. This creates an immense sense of threat and psychology to play as you read your opponent as much as the table, supplying a raw energy that few games outside of poker manage to provide.

There’s nothing worse than a smart-arse. Offering a perfect murder-mystery in a box, Consulting Detective sends you across London to interrogate suspects, cross examine witnesses, and gather valuable insight and clues to draw your conclusions about the perpetrator of each crime. But the truly Holmesian element? The fact that the game includes a recap from the great detective at the end of each tale, highlighting how he joined the dots and unpicked the crime faster than you can blink – comparing your ‘score’ for solving the crime with his. This ties the experience up in a perfect bow and, in hobby that allows for spaceships, dragons, and sci-fi wonderment – there is truly nothing more immersive and impactful than being taken to school by the big H himself.

What are your favorite board game mechanics? Tell us in the comments!