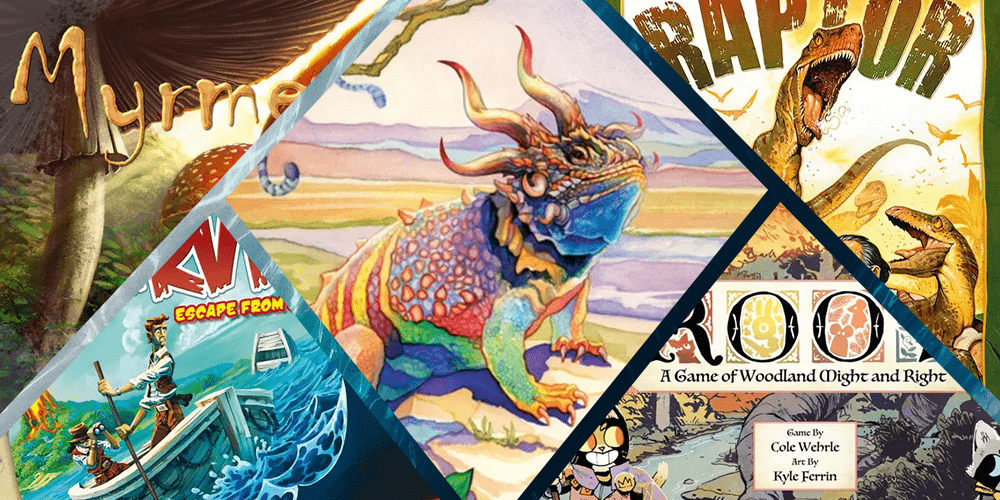 Top Board Games That Understand Nature Is Harsh 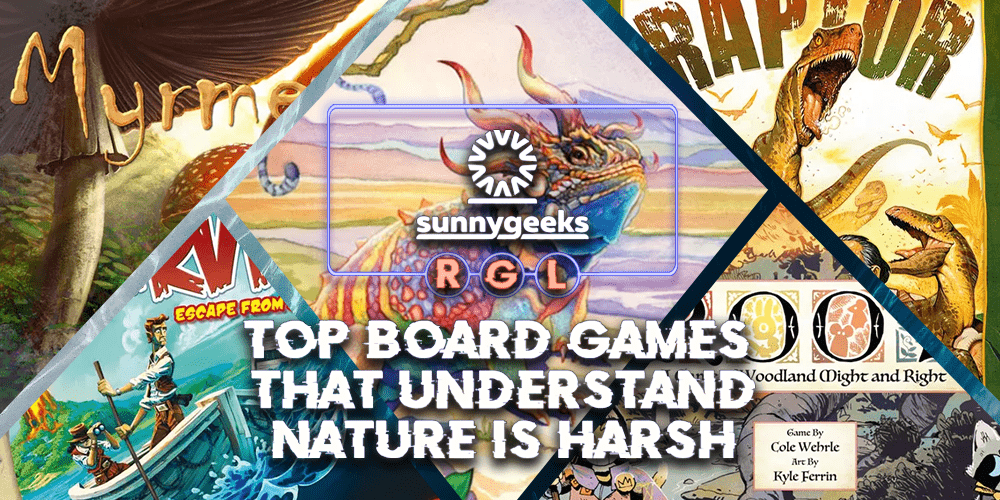 The natural world. Less Walt Disney and more “red in tooth and claw”.

While it’s’ fun to play games with cutesy critters, embracing your wild side can be a great way to spend an evening. Or rip your friends to shreds.

So, here are eight of our favorite games that embrace your inner Wolverine.

Anyone who’s ever played against green knows where we’re going with this. Built around the idea of ‘colored’ magics, MTG lets players build the deck of their dreams with some truly stunning card art and unique playstyles. Blue’s ability to bounce back spells is famously frustrating, as is Black’s capacity for filling graveyards with slaughtered monsters. But for our money – Green is where it’s at. Swarms of embiggened beasts overwhelm your ranks, colossal serpents batter your defenses, and horrendous spiders bring down their prey with no mercy. So, yeah – if you’re expecting a neat walk through the forest…this ain’t it.

An unparalleled success story from the mind of Cole Wehrle, Root combines the gorgeous art of Kyle Ferrin with a cutthroat game of area control and unique win conditions. What could be a cutesy children’s cartoon becomes World War Wind in the Willows. This pits players as warrior birds, malevolent cats, heroic mice, and (our personal favourite) wandering possums as you fight tooth and nail for your land. The game’s success has also added a number of expansions that build the player count, add new factions, and bring in high-quality pieces. All in the name of having a scrap in the woods.

You want ants? Because this is how you get them. Offering a unique take on worker placement and route-building for all of those who grew up with the wonderful Sim Ant, Myrmes puts you in control of your colony and shows the (often brutal) world of the insects. Play is split across two boards, with one representing your colony and the other showing what’s going on the world. This involves exploring, optimising food, and hunting down prey to feed your people. Once you’ve survived three years, players with the most points win. Provided your opponents don’t massacre you first.

Five little frogs. Sitting on a log. Until one of your opponents invades, sending you to the watery depths below. An abstract masterpiece from Keith Matejka, Bullfrogs is a cut-throat game of push and pull where players bully and bluster opponents for the most desirable resource of all. Lily pads. Scaling perfectly from 2 to 4, the game requires you to strongarm opponents while controlling the battlefield. This is a game of elegant feints and prods…with the occasional mad leap from one of your amphibian warriors as they bash opponents out of the way. Intense and highly competitive, this is the perfect filler for groups of any size.

Nothing more intense than dinos!

Dinosaurs in board games. Bringing them to the tabletop, is often a case of expectations meeting reality. But this masterpiece from Matagot does not disappoint. Pitting a mother raptor against a team of scientists trying to kidnap her kids, Raptor quickly devolves into a massacre. The ‘human’ player is constantly on the back foot as the dino rips the hunters apart, stalks her prey from the shadows, or terrifies them with fearsome howls. And even if you do manage to fill the dinosaur with tranqs or bag three of her offspring…you just come away feeling like such an @$$hole.

Now close to its 40th year of production, surviving the treacherous waters of a doomed island has never been more fun. Players are responsible for ferrying the survivors to the shoreline, with each individual piece given its own unique value. Tot those points up at the end of the game and the highest score is the winner. Simple…except when it isn’t. Players are required to forge their way through oceans filled with sharks and sea monsters. This lets opponents move these when they get the chance to snaffle your pieces up without a thought. Thankfully though, there are also dolphin pieces in some versions that can carry players to shore. Or – as it quickly becomes apparent – you can use these creatures to reverse-van-dyke your opponents by dragging their survivors away from land or into the mouths of waiting sea beasts. It’s a game for all the family.

You say, ‘dynamic ecosystem’. We hear ‘devour enough of your enemies as you can’. An accessible delight from North Star Games, Evolution asks players to evolve their own species to survive in the world players create. This involves the use of traits such long necks, being warm blooded, flight, and more – with each conferring a bonus. Doing so lets you create a breed of peaceful herbivores…or develop serrated teeth and go to town on your opponents. However, while eating Keith may feel like a valid strategy – it’s important to remember that each animal has its own place in the food chain. And while others can evolve to protect themselves against your attacks, there’s the risk of starvation. Though, if you’re going to lose anyway…

If we’re being completely honest, this may be as good as wizard battling gets. Somewhat appropriately published by Arcane Wonders, the Mage Wars series simulates no-hold-barred, pitched battles between two rival wizards. And while it may be incredibly metal to watch necromancers scrap with druids, our money is on the Beastmaster in this edition. Drawing from the ‘Animal Kinship’ spell book (each individual has their own), they can summon foxes, gorillas, wolves, and bears to do their dirty work – empowering them with spells as they race to rip their arcane opponent to shreds. Or if they want to get stuck in, they can take on animal powers to take on the enemy themselves. And while they don’t say that their opponent becomes dinner once the duel is over…it’s the law of the wild, isn’t it?

What are your favorite board games where nature takes the central stage? Tell us in the comments!